wisconsin police say "we are workers, too"

Last night's news from Wisconsin was the best yet. Governor Scott Walker ordered the capitol building cleared of sleeping bags, saying he would close the building for the weekend. Police said: No. 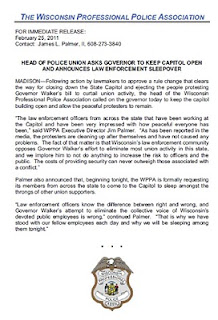 Law enforcement officers know the difference between right and wrong, and Governor Walker's attempt to eliminate the collective voice of Wisconsin's devoted public employees is wrong. That is why we have stood with our fellow employees each day and why we will be sleeping among them tonight.

When police officers recognize that they have more in common with other workers than with the state whose edicts they are asked to carry out, we are really onto something. These cops are the civilian equivalent of war resisters. More power to them!
Posted by laura k at 2/26/2011 05:00:00 AM