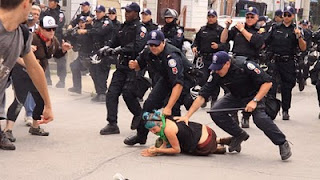 Call your MP. Email the party leaders. Speak out in the media. We must continue to cry out against the violation of our rights that took place in Toronto at the end of June.

In case the enormity of this crisis has faded from your memory, read this. Read the whole thing, and click through for the photos.

A 20-year-old environmental activist from B.C. is suing the Toronto Police Service, claiming she was hit by two rubber bullets during a G20 summit protest.

"I hit the ground. It's hard to describe how it feels getting shot," said Natalie Gray of Maple Ridge, B.C., about 40 kilometres east of Vancouver.

Gray was one of about 150 protesters who marched on a police-approved route to a former Toronto film studio that was converted into a temporary detention centre on June 28, the final day of the G20 meetings.

The protest and police reaction were captured on video by the media.

Half an hour after protesters arrived at the jail, police moved in. As the demonstrators were shouting their slogans, a pair of unmarked vans suddenly appeared and screeched to a stop.

Some demonstrators panicked and ran, while others got angry and tried to hold their ground. Then two more police groups rushed in.

Fearing for her safety, Gray backed away down Eastern Avenue. But she said she suddenly saw a police officer drop to one knee — holding the biggest gun she had ever seen.

She said the first blast hit her in the chest, breaking the skin and knocking her to the ground. The second hit her in the left elbow, she said, tearing off a chunk of skin.Natalie Gray shows a wound to her chest that she said was also caused by a rubber bullet.

As she tried to get up, uniformed police moved in, slammed her face into the pavement and knelt on her back.

"I have never been so terrified in my life," she said. "I immediately lost control of my bladder and the officers are yelling at me, 'Stop resisting, stop resisting.' And I'm saying, 'I'm not resisting. Please be gentle. Please be careful.'"

Gray was later charged with obstructing a peace officer, one of nearly 1,000 people arrested before or during the G20 summit.

But photographs of Gray's wounds taken by an emergency room doctor show she was indeed injured in the chest and arm.

"It hurt so much when it first happened and then nothing. And I was just kind of paralyzed. But as soon as I got shot, there was an incredible amount of pain in my abdomen."

Toronto lawyer David Midanik also said he has a client who is suing, claiming he was shot in the face by a rubber bullet. There is also reported be a class-action suit in the works.

The police are advising anyone with an abuse allegation to file a report with the Office of the Independent Police Review Director.