bsl madness in brampton, your help is needed 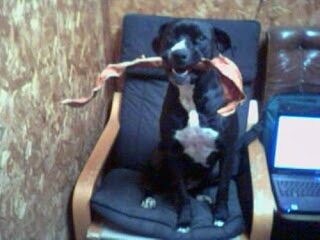 From the Brampton Guardian:

No one had complained about the young dog, he hadn't escaped 75-year-old Maria Gaspar's Vodden Street yard, and he had never bitten anyone.

But Rambo and his sister, Brittany, are on death row at the City of Brampton's Animal Shelter right now while their owners are embroiled in a battle to get their beloved pets back before they are euthanized. The deadline - Feb. 5.

Both dogs were seized from separate homes on Jan. 13 by city animal control officials who said they believed the dogs to be pitbulls.

Their owners say that's not true, and both say they have proof from veterinarians tracing their backgrounds as boxers/American bulldogs.

The city's veterinarian has a conflicting opinion, according to a letter sent to the Branco family, who own Brittany.

Gaspar is heartbroken. The senior citizen can't understand why Rambo was seized. She said the confusing part is, the city has licensed Rambo as a boxer/American bulldog cross for the past two years. His vaccination certificate from North Town Veterinary Hospital classifies his breed as a boxer cross. And, no one who has seen the dog has ever thought he was a pitbull, according to the distraught Gaspar.

The city told Gaspar that no one had complained about Rambo. He had not escaped the back yard. If anything, he made passersby laugh the way he would jump up onto the roof of his dog house to look over the fence, she said.

But it was that quirky little habit that led to him being removed from his home and held by the city under threat of euthanasia.

A passing animal control officer spotted Rambo on his perch in December, looking over the six-foot fence, and told Maria Gaspar she had to move the doghouse because Rambo could escape. Gaspar agreed, but then the issue of Rambo's breed came up. She was told to get a letter from her veterinarian attesting to the dog's breed, and to have him neutered. Gaspar said she got the required letter, and an estimate for neutering, and gave both to the city.

In response, the city sent a letter telling Gaspar there is no completed certificate from a veterinarian, and that "Rambo has been confirmed to be a pitbull by his parentage as well as the characteristics as defined in the City of Brampton Dog By-law..."

"It's not, it's not pitbull," said Gaspar emphatically, struggling for the English words to describe her upset. She can't talk about Rambo without crying.

"This problem is like a son problem," she said, emphasizing how important Rambo is to her. "Now, I no have dog, I no have money, I no have nothing... It's not fair."

They can't fight the city because her family doesn't have any money for a lawyer, she said, but Rui Branco is taking on the fight for both dogs. [More here.]

This is what breed-specific legislation leads to: the loving companion of a senior citizen, a dog who has done no wrong, removed from its home without due process and murdered. Because someone says the dog appears to be a certain breed. And the citizen, a taxpayer, has to fund this murderous madness!

This is why Ontario's dog laws make no sense. Imagine if this were your dog. It was almost my dog.

I hope you will take a moment to email the City of Brampton about this injustice: animal.services@brampton.ca. Please send a quick note of protest to try and help save these dogs, if not for the dogs themselves (who have done nothing to a death sentence!), for the people who love them.