it's all about respect: why the librarians of vancouver island are taking job action 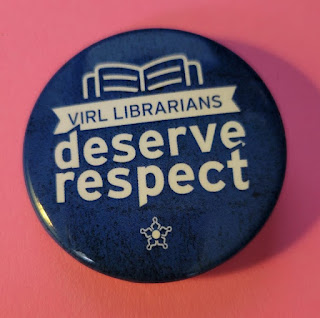 I have at least five posts in the works, but zero time to write them, because I am once again involved in a job action for library workers. I have refrained from writing about it thus far, but I feel a deep need to capture some of this on wmtc.

In some ways, the context is much different from the 2016 strike I led against the City of Mississauga. That local comprised 400 members, ranging from Pages to Senior Librarians, and members of CUPE run their own local. We first had to break away from a composite local to re-establish our independence, and then had to forge solidarity in a large unit with greatly disparate interests, and very little trust in their union. It was a monumental undertaking -- and a hugely successful one.

My present situation is very different. I belong to BCGEU. The 48 members of my bargaining unit are all librarians with a professional designation. I am a member of the bargaining committee, but not steering our course as I did in my former role.

The frontline library workers in the system belong to CUPE. Union members have cultivated deep solidarity between the unions -- which makes this job action possible.

Yet in many ways, the two job actions are extremely similar -- because in so many ways, all strikes and all labour disputes come down to the same thing. Workers want respect. We want respect for our labour and for our skills.

The principal ways employers can show workers respect is by paying a living wage, and providing safe and humane working conditions. When either of these factors are lacking, and workers are fortunate enough to belong to a union, a job action may ensue.

Although I love my job as a librarian and library manager, I do not love the actions and attitudes of my employer. This story from my earliest days on the job perfectly illustrates some of the issues. I was not able to share it here, for reasons which will be obvious, but as we are now in job action, I've decided to communicate more freely.

On my very first day on my new job, I was not told where to report. I was staying in the proper city, but there is more than one library branch in that city and I was never told where to go.
I was supposed to meet administrators at 9:00 a.m. I had to wait in my hotel room until someone reported to work at 9:00, who could then pick up my messages and give me the required information. Then I had to drive to an unfamiliar place, find parking, get access to a building, and so forth. I was almost an hour late on my very first day.
The person who neglected to give me the information did tell the others why I was late. This can be viewed as a simple oversight, which it was. But after more than three years with this employer, I can tell you it is a whopping big pattern that is constantly and consistently repeated. I'll exercise restraint and call it "internal communication problems".

The following day I was meeting a high-level administrator at a different location. She gave me directions and told me how to access the staff entrance. I misunderstood her directions and waited at the wrong door. It was December and I was waiting outside for 45 minutes. My phone (still with an out-of-province provider) was going straight to voicemail so I wasn't getting her calls.
Eventually a call got through, and I hurried to her office, full of apologies. This was her greeting: I've been waiting for an hour! My whole morning is messed up! Where were you? I was so taken aback, I struggled to explain what I thought. She spat her answer through gritted teeth: You need to take better notes!
I was dumbstruck. I thought of how I would have handled such an occurrence, with a new employee who was also new to the area and the entire system. How any decent supervisor would respond.

The following week, my manager told me I was invited to a meeting with them, their own manager, and the top administrator (the person from Day 2). My manager was acting very strangely, not making eye contact, and left in a hurry. I had no idea why.

A union steward had been assigned to the meeting. Again, I had no idea what was going on. The steward also didn't know.
The way the chairs were arranged in the meeting, I was sitting alone, facing four people. The union steward was not sitting beside me. (Note to stewards: don't do this.) The subject of the meeting? A blog post I had written praising my new job and new employer. I was read the riot act and received notice that I was to change or remove certain aspects of the post. (I removed the post completely.)
Note that the post was laudatory. Note, too, that I had no local contacts, so there was almost no chance that library users would read the post. No matter. I had mentioned the name of the library system, and for that, I was subjected to an inquisition.
The steward confirmed that the matter was not disciplinary because no policy regarding social media had been shown to me. My head was spinning. So this might have been disciplinary?? I documented a blow-by-blow account of a strike against my former employer, and I was never met with discipline.
Every day, all the days: autonomy, trust, respect, safety, cost of living
Like nurses and teachers, librarians struggle against a lack of professional autonomy. (Gee, what do these three professions have in common??)
Our employers frequently limit our decision-making capacities.
Deskilling and deprofessionalization are constant concerns.
We are not consulted or included in decisions that impact us, our staff, and our branches. Decisions are made by people who don't understand the realities of frontline public service.
We struggle with workload, as staffing models are skeletal, but plans and goals are voluminous.
We are treated disrespectfully, and our working conditions are often unsafe and scary.
And then there is the cost of living. In 2021, the cost of living rose 4.8% in Canada. So far this year it's even worse. No wage increase can keep up, but more is needed to help us cope.
Some of these issues can be mitigated by provincial safety codes, when staff are vigilant and hold employers accountable.
Some of these issues can be mitigated through collective agreements.
That's why we're on strike.
Posted by laura k at 3/18/2022 05:24:00 AM

Solidarity ✊🏻
Do let us know who we need to call and send emails to.

You want the Employer to:
1. Get back to the bargaining table
2. Make a fair offer that keeps up with -- or at least mitigates -- the skyrocketing cost of living
3. Ensure that greater health and safety supports are in place for librarians and frontline workers

This is possible because:
1. Executive salaries were increased by 5-14% !! These people never step foot in a library.
2. At least nine new executive positions have been created since 2018
3. The budget for staff salaries is greatly under-spent
4. The money is there, it simply needs to be re-allocated to increase salaries.

This is necessary because:
1. Librarians are the most important library resource.
2. VIRL Librarians earn significantly less than their counterparts in comparable systems.

WGH, thanks to your prompt, I've posted about this on social media, for my own contacts.

My goodness the story about the admonishment over your blog post is mortifying. I wish you and your fellow workers all the best.

Thank you, Dan. It was awful. What a way to start a new job in a new province! Thanks for your good wishes.

I have had bosses who were not fucking assholes, but I've had many of the other sort too--toxic, dysfunctional, careerist, controlling, way too full of themselves, and so on.

Union membership and being a negotiator cheered me up immensely when I was in the lions' den.

Wow, those first days sound like a true nightmare. Are you concerned about posting about them now, given how they responded to your laudatory post?

(Also, on Day One, did you mean that the person did or did not tell the others why you were late? I wasn't sure whether or not you'd left out a "not.")

It was a rocky start, for sure.

I wrote this while on job action, a deliberate decision. Since then, there's been a regime change, partly as a result of our strike. The post is a bit of a taunt -- daring them to move against me. They did not.

Day One, the person was very apologetic, and told the others why I was late.

OK, this is weird. I see now the post was dated in March 2022, but it just popped into my email this morning. I had been wondering whether there was another job action going on since I knew there had been one earlier this year. I only looked at the date of the post after reading your comment and realizing you were referring to things that have happened since.

Any idea why I would have received this now?

And I am glad to hear that that person was apologetic.

No idea why. It just happens sometimes. This morning I received a post from a blog I read dated in January.

OK, I will accept it as one of the many mysteries of cyberspace.