what i'm reading: the uninhabitable earth by david wallace-wells: a handbook for despair 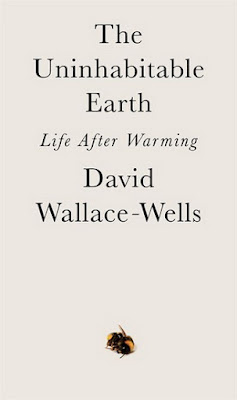 The Uninhabitable Earth: Life After Warming by David Wallace-Wells is a book about the not-distant future: what will happen to the planet as climate change continues.
I waited a long time to read this book -- first because of a very long waitlist at the library, but later because I was so ambivalent about reading it. When I finally had the book in my hands, I read the introduction... and was stopped cold. I felt a great weight of futility: whatever knowledge I would gain from reading this book would be utterly useless.
And so, full disclosure: this is a "what i'm reading" post about a book I didn't fully read. In 18 years of writing wmtc, this is a first.

Instead, I did the librarian readers' advisory read: first chapter, some random paragraphs throughout the book, conclusion.

My failure to read the entire book is absolutely no reflection on the book itself. In fact, it's the opposite: a tribute to the power and effectiveness of Wallace-Wells' research and writing.

Tl;dr? Climate change is much, much worse than you think, and is occurring much, much faster than you think. The final boarding call has already been sounded. The Save Humanity Express is leaving the station. But it hasn't quite departed. If we all run really, really fast, there is still a small window of time to save what we can. But only if everyone is onboard.

The book is based on all the available science, and is impeccably researched. The author's truth-telling is meant to sound the alarm by painting a clear picture of what anthrogenic (human-caused) climate change will actually look like, as it continues to worsen around the globe.

In the introduction, Wallace-Wells offers a few different scenarios, including a worst-case (eight degrees) that he says is unlikely to happen. Then he writes:

Between that scenario and the world we live in now lies only the open question of human response. Some amount of further warming is already baked in, thanks to the protracted processes by which the planet adapts to greenhouse gas. But all of those paths projected from the present -- to two degrees, to three, to four, five, or even eight -- will be carved overwhelmingly by what we choose to do now. There is nothing stopping us from four degrees other than our own will to change course, which we have yet to display. . . .

The devastation we are now seeing all around us is a beyond-best-case scenario for the future of warming and all the climate disasters it will bring.

What that means is that we have not, at all, arrived at a new equilibrium. It is more like we have taken one step out on the plank off a pirate ship. Perhaps because of the exhausting false debate about whether climate change is "real," too many of us have the developed a misleading impression that its effects are binary. But global warming is not "yes" or "no," nor is it "today's weather forever" or "doomsday tomorrow". It is a function that gets worse over time as we continue to produce greenhouse gas. . . . The last few years of climate disasters may look like about as much as the planet can take. In fact, we are only just entering our brave new world, one that collapse below us as soon as we set foot on it.

And this is where my hopelessness kicks in.

The opposite of hope

My own understanding of history, both ancient and modern, lead me to have zero hope.

The degree of collective will and cooperation that it would take to meaningfully slow and halt climate change do not exist and are extremely unlikely to be formed. I say "extremely unlikely" rather than "will not" because I am not so arrogant as to predict the future. However, nothing that I'm aware of, in the history of the world, leads me to any other conclusion.

Global cooperation does not exist. Global concern for humans does not exist. Billions of people around the globe have not been vaccinated against covid-19. First-world countries have not shared their resources to vaccinate people in poorer countries on the necessary scale. Even though it would help all of humanity if everyone on earth was vaccinated against covid, this does not happen. Such a vaccination effort would be incredibly simple compared to the global cooperation necessary to halt climate change, but still, it is not done.

Humanity has not collectively decided that every human being deserves the three most important resources to sustain life: adequate shelter, adequate food, and clean water. Millions upon millions lack these worldwide, including so many in the wealthiest countries in the world. The resources exist, the knowledge exists. The will to make this happen -- both globally and in our own backyards -- does not.

If the world can't manage this, how could it possibly marshal the collective will and resources to halt climate change?

Wallace-Wells includes many reviews or roundups of beliefs, literature, and attitudes about climate change. Paragraphs are crammed with thickets of name-checks. I suspect most readers will not be familiar with his references, and it smacks a bit of showing off.

In the meantime, environmental panic is growing, and so is despair. Over the last several years, as unprecedented weather and unrelenting research have recruited more voices to the army of environmental panic, a dour terminological competition has sprung up amoung climate writers, aiming to coin the new clarifying language -- in the mode of Richard Heinbert's "toxic knowledge" or Kris Bartkus's "Malthusian tragic" -- to give epistemological shape to the demoralizing, or demoralized, response of the rest of the world.

Giving the author the benefit of every doubt, I can assume this book is meant to horrify us into action, but for me it has quite the opposite effect. Human futilitarianism indeed.

What can "we" do, the individual

Of course I still believe we must do what we can. But what difference will it make: that, I do not know.

Are we all doing what we can? Being totally honest, I can't say that I am. Can you?

I try to be environmentally conscious in my choices. Like most people I know, I make many small-scale green choices all the time. But do I seriously inconvenience myself or radically change my lifestyle? I fly to visit family and friends, and one day I hope to travel again. If I have the opportunity to travel to Cambodia to see Angkor Wat, would I go? Absolutely I would. Life is short. I want to do the things I want to do. And: I have no belief that sacrificing a meaningful vacation will reduce greenhouse emissions in any meaningful way.

This is the kind of thing, when I had a large readership, that I would get roasted for. Entitlement, leftist hypocrite, blah blah blah. But I'm just being honest. As container ships criss-cross the globe by the hundreds of thousands, as businesspeople and honeymooners and touring musicians and politicians fly all over the globe, as North American consumers buy cheap, guaranteed-to-fall-apart-and-need-replacing goods made in China, would my sacrifice amount to anything?

If there were no air travel, it would make a difference. We saw that during the global covid lockdown, when air and water quality improved around the planet. But -- being uncomfortably honest here -- I am not prepared to voluntarily sacrifice something I love, something that gives my life meaning, for future eventualities.

In this I believe I am like most people. I am punting to the next generation.

But here's my more important bottom line: each individual concerned person could do every individual green act possible, but without a shift away from capitalism, no substantial progress will be made. Until and unless private profit is removed from the equation, we will not halt and reverse climate change.

What can "we" do, the corporate and political

In the end, Wallace-Wells doesn't so much as draw a conclusion as make a statement.

But, all told, the question of how bad things will get is not actually a test of the science; it is a bet on human activity. How much will we do to stall disaster, and how quickly?

These are the only questions that matter. . . .

Instead, we assign the task to future generations, to dreams of magical technologies, to remote politicians doing a kind of battle with profiteering delay. This is why this book is also studded so oppressively with "we," however imperious it may seem. The fact that climate change is all-enveloping means it targets all of us, and that we must all share in the responsiblity so we do not all share in the suffering -- at least not all share in so suffocatingly much of it.

That we may be the solution, but it is also the problem.

How can we do this? Where is the lever I can pull, the party I can vote for, the alternative reality I can enter, where "we" collectively solve the world's problems?

Can we build affordable housing near well-paid jobs, to end the long, carbon-spewing commutes that plague most North American lives?

Can we build huge amounts of affordable, reliable, public transit?

Can we choose to buy locally-made consumer goods, to curtail global shipping routines... when there are none? Even the most strenuous effort to "buy local" will provide only a small fraction of first-world needs.

Can we force corporations to manufacture locally, which would create millions of jobs and drastically reduce emissions?

For each of these questions: can a political party that calls for this be elected, and if it was, could it succeed? No and no. The forces aligned against it would be far too powerful. Democracy -- as currently practiced, laden with corporate interests and the governments who do their bidding -- is incompatible with the will needed to halt climate change.

Many of my friends answer this question with a call to revolution. I agree that nothing short of revolution could bring about the necessary changes. But even those who call for revolution don't agree on what a post-revolutionary world should or would look like. And even if we did agree, "we" -- the forces for good, so to speak -- don't have the power to create that post-revolutionary green world, as opposed to the many other less desirable outcomes that (history shows) are more typical of revolutions.

This book needs a warning sticker: guaranteed to damage your mental health. I doubt the author's purpose was to advance fatalism and despair, but that's what they've done.

Why would anyone have any faith in humans?

The National Weather Service has issued a heat advisory for Super Bowl weekend in Los Angeles. Temps are expected to hit 90 degrees.