I recently attended a six-hour workshop called Decolonizing Community Spaces. The workshop was led by two facilitators, one a Native American speaking to us from her traditional territories in Montana, and the other a Filipina-Canadian.

About 30 people attended; I believe all were health and service providers in the province of BC.

All the other participants raved about how much they learned, and how they will change their daily practices accordingly. I don't know if they were exaggerating, or if they were starting from a different place than I was. I encountered few, if any, ideas that were new to me, and was left feeling hopeless about the prospects for change. This was clearly not the intended result!

Much of the course was spent on activities aimed at making visible the many invisible forces and conditions that shape our world. My graduate school experience in Information Sciences often involved similar exercises. One often-used example is uncovering the bias embedded in classification systems, whether the Dewey Decimal System, the dog breed standards, or any other. You quickly learn that no systems are purely objective; there are assumptions and biases built in to every human-made system.

This is turn reminds me of another favourite topic of mine: how certain beliefs and actions outside the mainstream are labelled "political", while the dominant narrative is thought of as apolitical. For example, my choosing to sit as the crowd in a ballpark cheers a military display is political, but the war display is -- ridiculously -- not thought of as political.

I read a wonderful article once about academic freedom, how professors can enjoy that so-called freedom as long as they don't voice certain opinions, among them "questioning the naturalness of capitalism".

In seeking to make visible the constant presence of contemporary white supremacy and systemic racism, the course used these analogies: a tree, sometimes called "The Oppression Tree", and an iceberg.

Here are some images of the Tree of Colonial Oppression and the Tree of Liberation, borrowed with gratitude Indigenous Solidarity Ottawa. 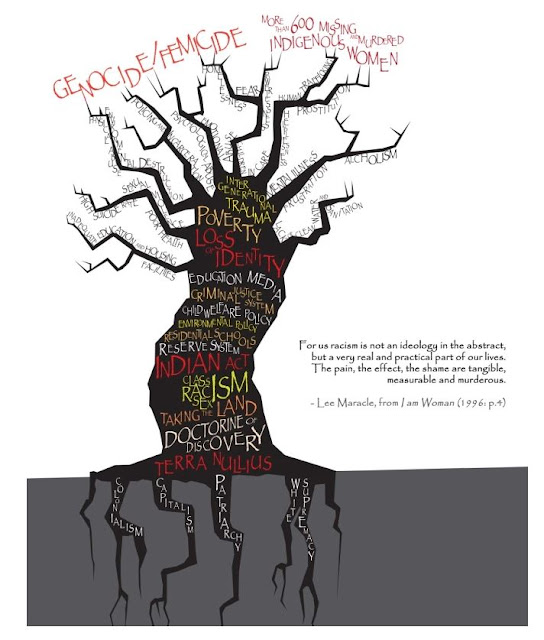 We can contrast the Tree of Oppression with a Tree of Liberation. 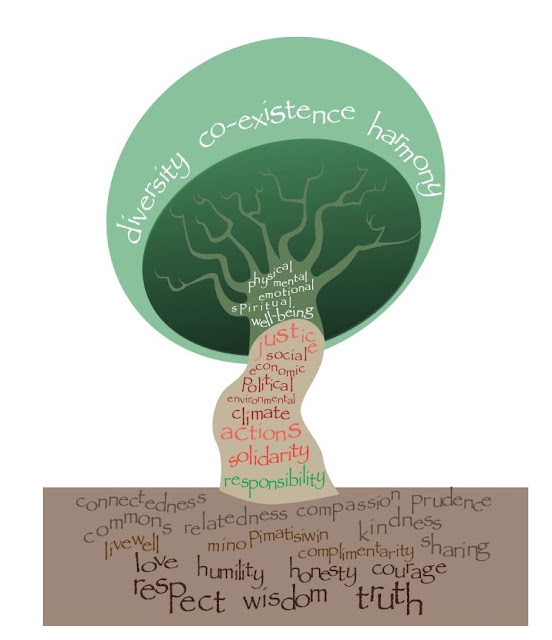 Another handy visualization is the iceberg, which (obviously) implies that most of the forces that shape and direct our world are beneath the surface.

Here are two iceberg visualizations, one very simple and a pear-shaped iceberg that is more fleshed out. (These images seem to be passed around without attribution, so I apologize for not crediting someone's work.) 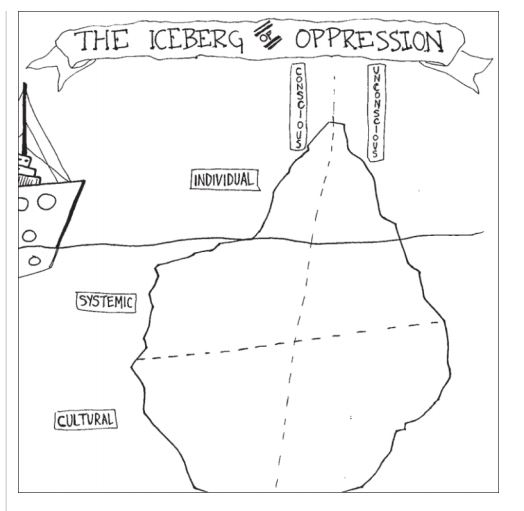 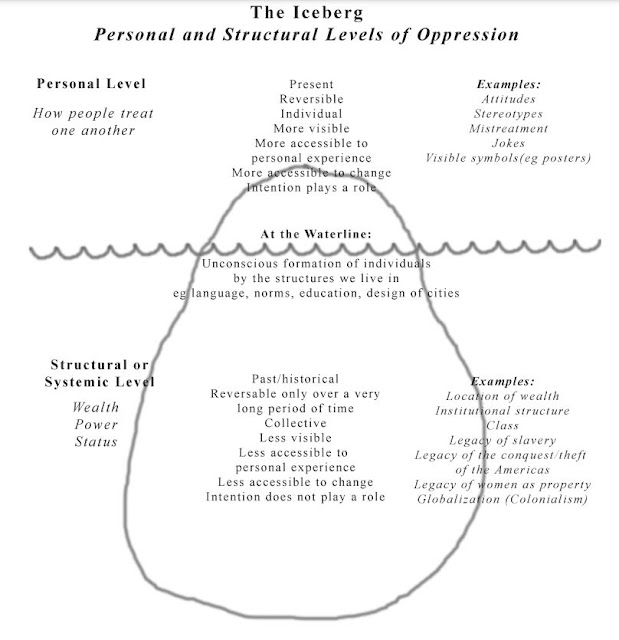 I find both the tree and the iceberg very useful -- especially the tree. I believe that history is constantly affecting the present, so seeing colonialism, slavery, and capitalism named as constant root forces is satisfying. It feels right.

The view from the leaves

So how do these metaphors apply to our communities, our institutions, and our organizations?

Here is one tiny example of how institutions and organizations are influenced by these invisible forces, and thus perpetuate the structures of the dominant, white, European-derived culture.

A new service organization is being formed. In order to achieve official non-profit status so it can legally raise funds, hire staff, and operate, the organization must have a board of directors.

The interested parties conduct a search for suitable people to sit on the board. They claim they are reaching out to a broad and diverse group of people, and, in all likelihood, they truly believe they are. The people on their list of potential directors reflect a diversity of skin colours, perceived ethnicities, and genders.

But who is considered for boards? Who is in a position to serve?

In other words, who has the privilege of fitting the profile of board material?

Thus the search for directors is superficially diverse, but it sees only a small subset of society.

In 2021, thanks to changes (forced by popular movements) over the past decades, that subset appears more diverse than it did in, say, 1941 or 1971. But the diversity is still very narrow.

Large segments of our society are precluded from this participation, almost from birth. Poverty, poor nutrition, substandard education, family violence and disintegration, foster care, incarceration, addiction, mental health -- often all of the above. The fact that a tiny percentage of people faced with this suite of barriers manages to overcome them changes nothing.

The privilege of time

One long thread of discussion in this workshop looked at Indigenous ways of knowing, contrasted with the modes of the dominant (western, white supremacist) society.

Those not familiar with the term "Indigenous ways of knowing" might like to google and read about it. I had never heard the expression until I took the Indigenous Canada course online. (It's free! Open to all! Go for it!)

Indigenous ways of knowing reflect an entirely different worldview than that of the dominant society. And while there are hundreds, thousands, of Indigenous cultures, most or all Indigenous societies have this in common.

I'm not at all qualified to teach this concept, but here are some graphics that speak to the general ideas. 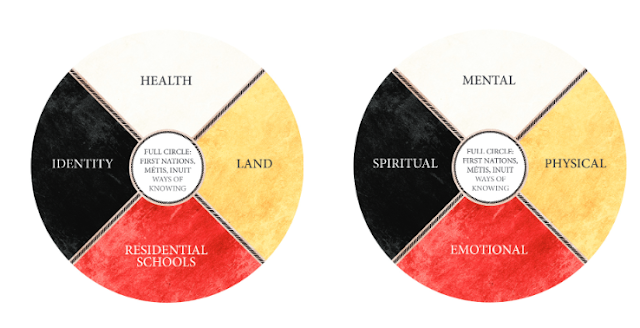 In a world that didn't reflect colonial oppression, our interactions would be more relational and less transactional. We would make decisions more by consensus and less by top-down authority. To create change, we could try many different approaches, then come together to discuss the results and collectively decide how to more forward.

I have worked within structures like this, in grassroots activism. It is generally a slow process, which can lead to deep feelings of trust, solidarity, and friendship among members. Unity is forged from shared values and purpose. Leaders emerge naturally, and they serve more as coordinators than authority figures.

This model has its drawbacks, of course, but working within this framework can be a deeply satisfying experience. It is a framework that exists outside of official, established institutions.

In our work lives none of these things are possible. We have deadlines. We have limited funds and, above all, limited time.

We must justify our time, and in order to continue receiving funding, we must demonstrate results in a manner defined by external sources. For most organizations, funding relies on statistics, and those statistics must be generated on a regular basis.

All this is embedded into the organization. No matter how much good that organization seeks to do in the world, its processes and practices reflect a top-down approach. It is a tree that grows from colonial, capitalist, patriarchal roots.

Where does that leave our prospects for creating change in our work?

Many librarians and library administrators care deeply about reconciliation. We want to acknowledge the deep roots of colonialism and the many poisons that have grown from that tree. We want to welcome all people as equals. We want the community's needs and wishes to determine the direction our libraries take.

But we cannot change roots. Roots are history, and history can never be changed.

We can pull back the veil to reveal levels of privilege.

We can seek and create opportunities to use our privilege for the greater good.

We can shut up and step back. We can let others take the floor and we can listen to them when they speak.

We can build relationships, creating opportunities for community input.

If we are white, we will inevitably hear racism from people who look like us, and when we do, we can speak up.

We cannot change how a board of directors is chosen.

We cannot change top-down governance in the organizations that employ us.

We cannot change a system driven by statistics meant to justify the use of public funds.

Thus this workshop left me feeling despair about the prospects of decolonizing our communities.