listening to joni: #17 and final: shine 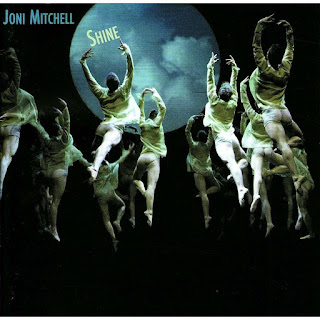 Shine is Joni's most recent, and likely final, studio album. She came out of retirement in 2007 to release the album, nine years after her previous Taming the Tiger.
Shine, which was also re-issued on vinyl in 2020, is a themed collection: the lyrics focus on environmental destruction and endless war. Joni composed some of the tracks for The Fiddle and the Drum, a collaboration with the Alberta Ballet Company, for which Joni served as artistic director.
At the time of the album's release, most critics interpreted the lyrics as references to Hurricane Katrina and the US's invasion of Iraq. Today, not tethered to specific recent events, the songs ache with heartbreak, frustration, and anger at how we humans have destroyed our planet.
The album opens with an instrumental, "One Week Last Summer". When I first heard it, I thought it was a bit "Joni by the numbers," that Joni was musically repeating herself or relying too much on old patterns. But the more I've listened, the more the song has revealed itself to me. It's gentle but very powerful. It welcomes you, enfolds you, ushers you into the feel and tone of what follows. You can hear some Court and Spark in it, and some Blue, and some distinctly Joni arranging. She's not quoting herself so much as being herself.
In the lyrics booklet, Joni explains the song's title and the importance of that week, in which she experienced an inner peace and contentment, and a musical re-awakening.

I stepped outside of my little house and stood barefoot on a rock. The pacific ocean rolled towards me. Across the bay, a family of seals sprawled on the kelp uncovered by the low tide. A blue heron honked overhead. All around the house the wild roses were blooming. The air smelled sweet and salty and loud with crows and bees. My house was clean. I had food in the fridge for a week. I sat outside 'til the sun went down.

That night the piano beckoned for the first time in ten years. My fingers found these patterns which express what words could not. This song poured out while a brown bear rummaged through my garbage cans.

The song has seven verses constructed for the days of that happy week. On Thursday the bear arrives.

I love this statement, and I'm grateful that Joni included it. I can easily relate -- and I hope you can, too -- to the simple feeling of contentment, and how that freed her mind and her creative impulses. I also love that she ended the statement with some classic Joni humour.

The lyrics on Shine sometimes sound a little clunky and prosaic, as often happens with topical songs. But I have to add that they are a bit clunky for Joni. Even Joni's most strained lyrics are above-average. The songs mourn the paradise that's been paved into a parking lot, despair at what remains, and yearn, wish, and hope for "the genius to save this place," (from "This Place"), hoping when you have no hope: "if I had a heart, I'd cry" (from "If I Had a Heart").

"Strong and Wrong" is the most powerful and direct anti-war song Joni has ever written. Unlike many familiar anti-war songs, this is neither anthem nor folk song. It's a slow jazz meditation, the beautiful, rich piano chords accented by quiet drum and pedal steel. A lyric references another powerful anti-war song from another era: "Where have all the songbirds gone? Gone!" and then turn to a Joni reference: All I hear are crows in flight, Singing might is right, Might is Right! At the time this was thought to be about the US invasion of Iraq, and although those events may have inspired the song, it applies to all wars at all times, and to humankind's apparent inability to stop making war.

War -- its futility, its waste, its madness -- was certainly on Joni's mind. The title of the Ballet, The Fiddle and the Drum, is also one of Joni's earliest songs, which she famously sang on the Dick Cavett show, immediately following Woodstock. (You can see it here.)

My two favourite songs on Shine are the title track and "If," an adaptation of the famous Rudyard Kipling poem, with added verses.

"Shine" (the song) is a litany of horrors, some global, some more specific.

But although the list of horrors is long, Joni implores us: shine. I hear this as having many meanings.

Shine a light to expose evil.

A reference to the gospel classic, "This Little Light of Mine," in heavy use during the US civil rights movement.

"Earthshine," captured in the most famous environmental photo of all time, "Earthrise".

As Joni sings "shine on... shine on," I also hear echoes of the Pink Floyd classic, "Shine on You Crazy Diamond" -- now referring to each of us, and to all of humanity.

The lyrics of "If" are straight out of the Kipling poem, with some masterful tweaks and a few new lines inserted. Comparing the poem and the song line by line, I was surprised that some lyrics I assumed were Joni's were actually from the poem. Of course Joni has removed the sexist and macho ending, and instead sings to perhaps her daughter, her grandson, or to us.

I stumbled on "If" as a teenager and copied the words into my quote book. Even before knowing that Kipling was a racist colonialist, I hated the ending: I used a different colour pen and shaded over those last two lines. But the poem itself is powerful, and shouldn't be forgotten because the poet also wrote -- and is associated with -- a lot of offensive, racist work.

Shine also includes a remix of one of Joni's most famous songs, "Big Yellow Taxi (2007)". Its inclusion highlights how humanity has utterly failed since that song's debut. It serves as a barometer of our destruction. Paving paradise for a parking lot now seems a quaint notion, with more species on the brink of extinction and the very survival of the planet in question.

Throughout, Joni's voice sounds tired, strained, breathy. Her range is more limited, nowhere near the power and range she could harness in her earlier music. Of course that's to be expected in any older artist, especially a lifelong smoker, but it's still a bit sad when that vocal instrument was once so masterful.
Hear Music label
Shine was released by Hear Music, a label owned by Starbucks. Its music was featured on Starbucks' in-store playlist, and the CD was available for sale in Starbucks cafes.
Many critics disapproved of this, some quite harshly. I don't get that. It's not as if the lyrics plug the coffee chain or the CD cover is emblazoned with the company logo. Working with Hear Music was an opportunity to reach a demographic that knows Joni's work -- and even more importantly -- still buys CDs. She clearly retained all creative control; do we dream this woman would ever do otherwise?
I see this as a smart marketing decision. Joni's usual label, The Warner Group, is owned by WarnerMedia, a multinational entertainment behemoth. What's the difference?

The album cover package is a simple and austere white font on black background, with striking images from the ballet.

Joni designed the cover and package, but for the first time, she neither painted a self-portrait for the album nor used her own paintings in the cover. Of course, she collaborated with a choreographer and dancers on the dance itself. 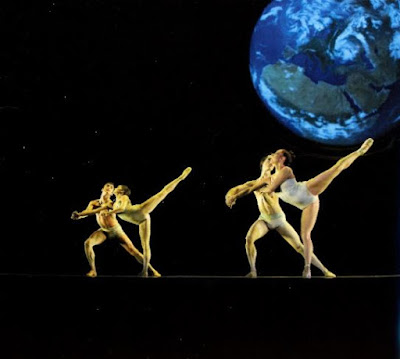 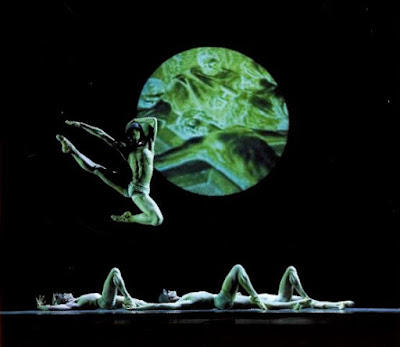 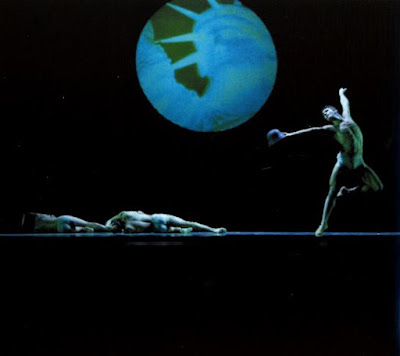 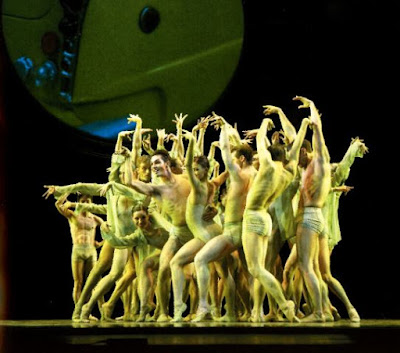 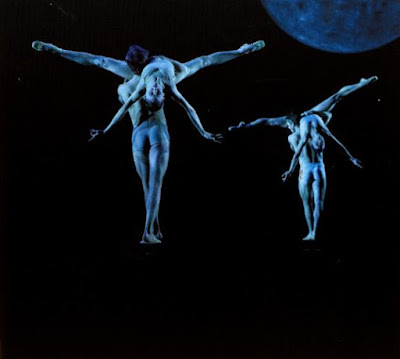 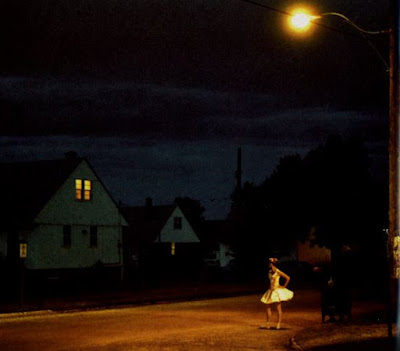 In this interview from 2007, Joni talks about the tremendous creativity that she was able to express, as musician, artistic director, and visual artist through the Shine project. She says that Starbucks was "instrumental in this album being born at all", and also specifically mentions the Kipling poem, and the dancers' reaction to it.

She also confirms my impression from the lyrics: "Rationally I have no hope, irrationally I believe in miracles."

It's seven minutes long and worth a watch.

With this post, I have completed the "listening to joni" project on wmtc.

Re-listening to Joni's music in chronological order brought me new musical insights, and re-connected me with my deep and abiding love of her music. It was sometimes a very emotional experience, both for personal memories and feelings I associate with the music, and the profound meaning I invest in many songs.

This was also a very challenging writing experience, as I struggled to describe what I heard and offer some analysis. I'm not indulging in false modesty when I say I really never succeeded to my satisfaction. But that matters little. Writing this series was a great experience, because it brought me closer to the heart of the genius that is Joni Mitchell.

I'm grateful to Les Irvin for including these posts in the JoniMitchell.com library, and proud to see my words incorporated there.

... the gospel classic, "This Little Light of Mine," in heavy use during the US civil rights movement.

I can't imagine I have anything to say about them that isn't widely available elsewhere. I did this project for me -- to review and really focus on Joni's career. If I hadn't been writing about it, I wouldn't have listened and re-listened so intensely. Just reviewing the archive sets because they exist... meh. Unless when I listen to them, I am moved to write.

So funny you say that. Two nights ago I watched an episode of "30 Rock" that had Alec Baldwin's character singing that very song -- on the subway with 3 Black dudes. (A cutaway -- very funny.)