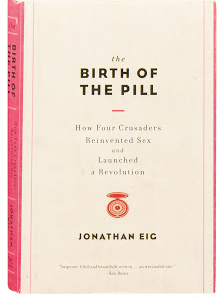 "...Demand [for diaphragms] far exceeded supply. Diaphragms were smuggled into the country from Canada, but still the Bureau [the birth control clinic] couldn't get enough. Katharine proposed bringing in more from Europe and developed a plan for doing it. In May 1923, she sailed across the Atlantic with eight pieces of luggage, including three large trunks. While there, she bought more large trunks, explaining that she intended to purchase many of the "latest fashions" during her trip. She met with diaphragm manufacturers, placed her orders, and had the devices shipped to her chateau. Then she hired local seamstresses to sew the diaphragms into newly purchased clothing, put the clothing on hangers, and packed the exquisite dresses and coats in tissue. Eight large trunks were loaded, sent through customs, and carried aboard the ship as Katharine sailed for home, handing out generous gratuities at every station. Katharine McCormick, aristocrat, smuggler, rebel, arrived at the clinic by taxi trailing a truck containing the most exquisitely packaged diaphragms the works had ever seen -- more than a thousand in all, enough to last the clinic a year.