When we moved to Port Hardy, I was sure that none of our Ontario friends would ever visit. It's so far away, and not an easy place to travel to. I was so happy to be wrong! Two sets of close friends have reason to be in Vancouver this year, and are adding on some Vancouver Island vacation, including staying with us for a few days. This makes me so happy!

Our friends M@ and sM were here this past week. The timing was a bit mad -- our first days with the full pack of five -- but it was also very fortuitous. Having extra hands-on help with the dogs, and extra eyes with dog experience, definitely helped us over a few speed bumps.

We took our friends on a drive/hike to San Josef Bay. As long as visitors want to bother, I'll never get tired of this (although Allan is already tired of it). The road didn't seem quite as long and grueling this time, the hike is brilliant, and the beach is heavenly. If we don't want the hike, we'll try Grant's Bay, reported to be "nice, but not as nice as Sanjo", and just steps from the parking lot. 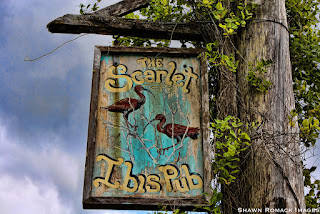 On the way out to Sanjo, we stopped to stretch our legs in the tiny hamlet of Holberg, which I wrote about here. The Scarlet Ibis Pub -- the only such establishment one sees on the road to Sanjo -- is open for the season, but was closed that day.

The host invited us in to use the washroom -- and to hear a sales pitch. She runs the whole place herself and, after 40 years, is ready to sell and retire. It's a beautiful pub, with a classic home-cooked menu, a view of an inlet, and a small living suite attached. The price is a steal for somebody. But the location... wow. 50 kms on an unpaved logging road to nowhere. According to our host, the pub does a steady business with forestry workers (loggers and replanters), about 80 locals, and the Sanjo beach crowd. But there is nothing else in the area -- no supermarket, no bank, no school.

With our guests, we also spent some time on "our" bay, the lovely paved waterfront walk in Port Hardy. We saw the usual eagles, and sM spotted a sea otter, but it was too far for a good view. Looking for something else local to do, we went to Storey's Beach, a short drive away and a favourite spot for the dogs. These trips were all sans dogs, for several reasons -- and that turned out to be a very good thing.

We were watching some herons and possibly an osprey, looking at shells, and whatnot, when a bald eagle swooped down to the sand. It was quickly joined by another, then another, and another. The birds were tugging and fighting over some morsel in the mud; other eagles swooping in for a better view and a try at the prize.

At one point, there were eight eagles, some on the sand and others flying low overhead. One flew off with fish guts in his talons, while three others fought over more remains.

It was an incredible sight. We were at most 50 feet away. I was concerned we were standing too close, but the birds were completely unconcerned with us.

After some time, when only one bird remained on the scene, we crept up closer. There were small pools of blood in the sand. I immediately thought of nature red of tooth and claw, from Tennyson, often used as a shorthand for the Victorian-era view of nature -- and M@ said it before I did.*

Allan and I didn't have our camera with us, but lucky for you, our friend sM -- a talented photographer -- did. I'll post a link when I have it. 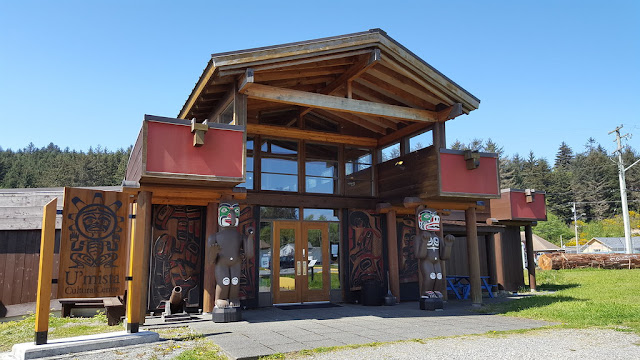 We took the ferry from Port McNeill to Alert Bay, a mostly Indigenous community on Cormorant Island. There's a cute little main street, which I'm sure comes alive in the summer months, some hiking trails, an art gallery, and a few other minor attractions, but the principal reason to visit is the U'mista Cultural Centre.

U'mista is a small treasure trove of First Nations art, beautifully curated and displayed, and especially notable for how it was acquired. All the objects have been reclaimed and repatriated from museums and private collections. From the late 1800s until the 1950s, as part of its genocidal policies against Indigenous peoples, Canada outlawed Potlatch.

Potlatch is a ritual re-distribution of wealth, practiced by the Indigenous peoples of the Pacific Northwest Coast of Canada and the US. About the Coastal peoples, you will hear it said: the wealthiest family is not the family that acquires the most, but the family that gives the most away. In a celebration of food, song, and storytelling dance that goes on for days, the wealthiest families would give food, clothing, other necessities, and also luxuries, to the rest of the community.

At Potlatch, ritual masks and robes would be worn for dances that told stories. When the ceremonies were outlawed, the Canadian government confiscated all the regalia. Indigenous scholars and activists have spent decades tracking down and attempting to acquire the stolen objects. Over the decades, too, Potlatches were held in secret, and the U'mista Centre honours the courageous individuals who were determined to keep their traditions alive.

I have read about the residential schools, and have learned about other similar situations -- for example, in Australia, depicted in the brilliant, heartbreaking film "Rabbit Proof Fence". I thought I knew how horrifying and disgusting both the schools and the policies were. Yet, when I learned more about them in the online course I'm taking, I must say, as bad as I thought it was, it was so much worse. It's painful to contemplate these injustices, but we are obligated to bear witness.

At U'mista, there are also beautiful photographs and displays about Indigenous activists and other community leaders. In the summer, there are cultural tours and sometimes the opportunity to see dances performed. There's also a fantastic gift shop, where everything is made in Canada and Indigenous artists are credited (and, I presume, paid).

Several restaurants were not yet open for the season, but we had a delicious lunch at the Bayside Grill. Don't let the ragtag coffee-shop appearance put you off. All our food was very good, especially the Indian dishes.

* Please do not tell me that Tennyson did not originate the phrase. 1, we all have Wikipedia. 2, in the world of arts, literature, and culture, this is Tennyson's phrase. Your cooperation is appreciated.
Posted by laura k at 5/17/2019 11:49:00 AM