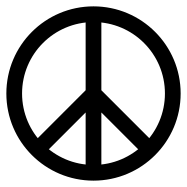 Robert Fisk: "...Heaven be thanked that the soldiers cannot return to discover how their sacrifice has been turned into fashion appendage."

Why no red poppy, why no white poppy:

It's that time of year again, the week when no one dares show their face on Canadian television, or indeed in any public place in Canada, without a red poppy symbol dutifully stuck on their lapel. What was once (supposedly) a remembrance of the horrors of war drifted first into a celebration of war and finally into obligatory, reflexive display.

Many of my friends are wearing a white poppy today, and I wish them good luck with their campaign. I myself have no wish to display a physical comment on a symbol that is meaningless to me. It would feel like wearing a Star of David to show that I am not Christian.

There is only one symbol that can express my feelings about the war dead - the Canadians, the Americans, the Germans, the Japanese, the Vietnamese, the Guatemalans, the Africans, the Native Americans, the Iraqis, all my fellow human creatures - and the wounded, and the ruined, and the heartbroken, and the shattered witnesses - the millions of lives wasted - for conquest, for profit, for nationalism, for ideology, for imperialism, for nothing. That is the peace symbol I wear every day. And much importantly, inside, in my heart of hearts, there is my core belief that war is evil and we must oppose it.