listening to joni: #6: court and spark 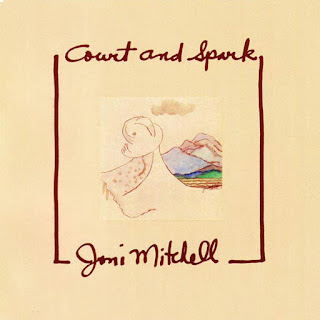 Writing about the music of Joni Mitchell has been a huge challenge. My love of music and my writing abilities seem to live in separate spheres: I write with my brain, but I listen with my heart. If writing about Joni's music has been challenging, writing about Court and Spark feels impossible. The love and connection I feel for this music is impossible to put into words. So with that disclaimer, I will now attempt the impossible.

Court and Spark is many Joni fans' favourite album. I mentioned that fans over a certain age seem to choose Blue; fans under that age, those younger than the boomer generation, seem to gravitate towards Court and Spark.

Listening to this music in retrospect, you can follow the very clear musical progression from Blue to For the Roses to Court and Spark. But in its day, no one could have been prepared for this masterpiece.

On Court and Spark, Joni more fully realizes many threads that emerged on previous albums. The music itself is richer, more layered, more polyphonic than Joni has written before. Woodwinds, strings, brass, percussion, and vocal harmonies are all a major part of this album, often taking centre-stage. The lyrics are at once some of the most poetic Joni has written, but also among the most accessible, with some of her familiar themes elegantly fleshed out.

Something unusual on this album is Joni's use of instrumental breaks to continue the story she's telling. The best example is on the album's centrepiece, "Down to You".

Things that you held high and told yourself were true
Lost or changing as the days come down to you.

She (I think "she", but it doesn't have to be) seeks solace in a one-night stand. Then,

You brush against a stranger and you both apologize: is there a more perfect image of loneliness and alienation?

After the spiritual-sounding repetition of that line, there is a musical break. It starts out with slow, deep, somber notes, but the tempo picks up, the waves of strings give way to pizzicato, the piano shines through -- the dark bass notes give way to a more lighthearted treble -- and piano chords become triumphant. We have survived the dark night. Then at last the woodwinds signal: a new day has dawned. There's an oboe trill that completely takes me apart, every time I hear it.

When the long instrumental break ends, we look around to discover we're in a totally different place -- one of acceptance, affirmation, maybe even transcendence. When the lyrics return, they celebrate that life is always changing -- that life is change -- and that we all hold all of human potential in our hearts.

I can't imagine how many times I've listened to this song, yet as time goes by, it only means more to me.

Court and Spark is full of so many moments like this. Writing this post, I saw that on the cover of my original LP, in the lyrics to "People's Parties," two lines are underlined in blue pen.

I feel like I'm sleeping
Can you wake me

This is probably the only lyric underlined on an album cover in my entire collection. (I didn`t realize it was there until I wrote this post.) The girl with that blue pen was struggling with depression, and the continuing effects of an abusive upbringing, and the beginnings of her own liberation. I was waiting to wake up to myself. I related to the girl in the song:

There is much internal conflict in the lyrics of Court and Spark. The "art vs. commerce" conflict, this time round, is not hers, but someone else's -- in "Free Man in Paris," famously about Joni's close friend, the producer David Geffen. Poor Geffen was so deeply closeted, that he reportedly begged Joni not to release the song, feeling that it outed him as gay. There's really nothing in the lyrics that imply anything about sexual orientation. Geffen's fear speaks to the paranoia that comes with a life in hiding.

The other conflict, presumably Joni's, in Court and Spark, is career vs. love. From "The Same Situation":

Joni hits us with this right up front, in the title track. Love has "come to my door" -- this love understood her so well, that "it seemed like he read my mind, he saw me mistrusting him and still acting kind" -- but she couldn't leave her life and her career in California.

On JoniMitchell.com (an amazing resource), I found some joker from the Oakland Tribune who clearly wasn't up to the assignment. In his opening paragraph, he accuses Joni of "tiptoeing in and out of love just enough to gather some material together for a new song." He writes that "Free Man in Paris" "infers" (by which he means implies) "that business responsibilities leave her cold" and in another song, "seems to be acknowledging the fact she may end up an old maid". All I can say is I'm glad my first juvenile attempts at writing aren't preserved on the internet.

For serious criticism, though, Court and Spark appears to have been universally acclaimed. But don't worry, the "bad critic comment" section will soon be very useful.

Joni's Japanese-inspired drawing combines mountains, water, and an abstract wave that is also a lover's comforting embrace. Against a tan background, the title and artist's name embossed in Joni's own handwriting, it's understated and elegant. Inside, an abstracted photograph of Joni, eyes closed in what seems like musical bliss.

The most famous song on this album, Joni's "biggest hit" -- a strange concept to apply to this music -- was always my least favourite. But "Help Me" contains an iconic Joni image: "the lady with the hole in her stocking", who has by now become the Joni's stand-in, the lyric-persona Joni.

On "Just Like This Train," that lady with the hole in her stocking looks out the window at the "rocks and these cactus going by".

You know, even that hole in the stocking is a conflict. She wears stockings -- "a refinement" ("Ludwig's Tune") -- but she's also a bit unkempt, or more likely defiant, refusing to wear the proper clothes. Part of the glitz and the glamour, but apart from it, too.

This is the first album for which Joni takes producing credit, knocking Henry Lewy down to "sound engineer". Lewy felt he had been her producer. Joni felt she has always been the producer, with Lewy merely a technician.