from the 2018 cupe ontario library workers conference: libraries and the opioid crisis

I recently attended the CUPE Ontario Library Workers Conference, which has become a highlight of my year since I first attended (and was elected to the organizing committee) in 2015. It has eclipsed and replaced the OLA Superconference as the most relevant and enjoyable must-attend conference in my schedule.

When I first got my librarian degree, I was very excited about attending my first "OLA" (as it's always called). But I quickly learned that the sessions are a crap-shoot, sometimes relevant but often obvious and dull. There's also a great deal of boosterism by OLA and the member libraries. For the difference between the two conferences, for OLA, think employers and libraries, for CUPE Ontario, think labour and library workers.

The most moving part of the conference -- by far -- was a talk by outreach worker Zoe Dodd. Zoe has worked with marginalized people with HIV and Hepatitis C, and now her work has shifted to the opioid overdose crisis. She and her co-workers -- who are mostly volunteers -- had been telling the government that this crisis was looming for the past decade, but their alarm fell on ears that refused to hear.

Now the deaths from fentanyl overdoses eclipse those from HIV at the height of the AIDS crisis. Last year there was a 52% increase of fentanyl deaths over the previous year. Yet Ontario has refused to call this a public health crisis. British Columbia is the only Canadian province to declare opioid overdoses a public health emergency -- and this has saved thousands of lives.

Death by overdose, Zoe told us, is preventable. The majority of those affected are already marginalized people living in poverty. (Indigenous people are 400 times more likely to die of an overdose than the general population.) Thousands who survive end up in comas, on life support.

There were coordinated emergency health efforts for both H1N1 and SARS outbreaks; lives were saved by those decisions. But when it comes to drug use, governments spend almost exclusively on enforcement, rather than harm reduction. That is, they treat drug addiction as a criminal issue rather than a health issue. This is a moralistic decision -- and a lethal one.

Frustrated and angry over both Ontario's and the City of Toronto's inaction, Zoe and her comrades acted on their own. They brought 10,000 vials of naloxone -- the drug that reverses fentanyl overdoses -- into Canada before it was legal. They raised $95,000 online. They pitched a tent and opened a site, staffed entirely by volunteers. At the conference, we were so proud to learn that CUPE Ontario bought the group a trailer, so they could safely serve more people! They did this while it was still illegal, a fact that makes me feel really good about my union.

This intrepid band of volunteers forced Ontario and Canada to change their policies. Now harm reduction sites are opening across the province -- including in Mississauga.

What does this have to do with library workers? Only everything. Libraries, as public spaces, are often places of drug use and of overdose. Library workers across North America are being trained in the use of naloxone, and they are saving lives.


Zoe addressed some myths about naloxone use, demystifying the process for all in the room. Many people -- including 1989 officers -- thought there was a danger of a person coming out of an overdose becoming aggressive and violent. Turns out this is simply untrue. Typically a person coming out of a drug overdose is groggy and confused. Their brain has shut down from lack of oxygen, and naloxone is beginning to restore the flow of oxygen to their brain. Far from being violent, they are only gradually waking up.

Many people believe that administering naloxone is dangerous, as we can be exposed to fentanyl or naloxone. This is also untrue. Fentanyl must be ingested to be harmful. Naloxone, Zoe said, is virtually "idiot proof". If a person is not overdosing, the drug has no effect. But if they are overdosing, it will save their life. (Note that more than one dose of naloxone may be needed.)

The most moving and disturbing part of Zoe's talk was hearing how she and her co-workers have suffered. Outreach workers and the people they serve are often one community. The pain they witness and endure is staggering. In one year, Zoe lost 30 clients and six friends. Outreach workers have committed suicide, overwhelmed by grief. There is a secondary crisis of trauma among the workers who have witnessed so much death. Now these workers are using their grief and anger to drive change. It was incredibly moving and inspiring.

The CUPE 1989 executive wants to get involved. For starters, we've decided on a three-part course of action. One, we'll get trained in the use of naloxone. Two, we will share this education with our members and our employer. And three, we will advocate for a greater role of social services in our libraries. We hope to host Zoe Dodd in our own libraries.

There have been some good stories about Zoe and her co-workers.

Front-line workers struggle to cope with opioid crisis in an issue of Now magazine with a great cover, and

'Drowning in all this death': outreach workers want help to fight drug overdose 'emergency' on CBC.ca.

This is the video of Zoe Dodd addressing Justin Trudeau during one of his extended photo-ops. 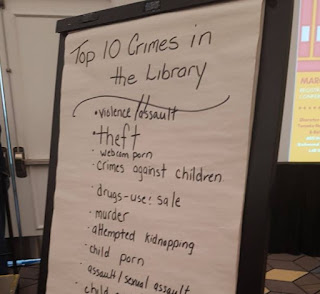 This year's group exercise at the conference was listing the "Top 10 Crimes" we've witnessed or heard about in our libraries.

The crimes that appeared on the most lists were crimes against children: abuse, neglect, abandonment.

And since this is, after all, my personal blog, I'll share that I have been elected chairperson of the CUPE Ontario Library Committee. It's not like I need anything else to do! But our long-time chair has stepped down (more on that later), and I felt like I had to step up.
Posted by laura k at 3/25/2018 03:38:00 AM