what i'm reading: the new jim crow by michelle alexander 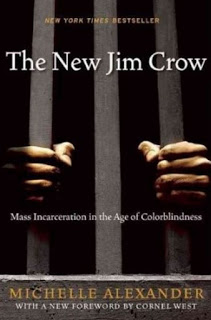 When I first heard the incarceration of African Americans in the United States referred to as a "new Jim Crow," I thought it must be hyperbole. So did Michelle Alexander, a fact she discloses in the introduction to her book. As Alexander researched the concept, the more she learned, the more she changed her mind. She changed my mind, too.

In The New Jim Crow: Mass Incarceration in the Age of Colorblindness, Alexander builds an unassailable case that mass incarceration through the (so-called) War on Drugs is the third large-scale caste system that holds Black Americans in a second-class status. This is true even in a society that includes Oprah Winfrey, Clarence Thomas, and, of course, Barack Obama.

The first caste system was slavery. The second was the laws and customs of segregation, discrimination, and terror known as Jim Crow. The third and current system is mass incarceration. This includes rules governing local policing, key court rulings, the court system itself, the parole and probation system, and laws that discriminate against former inmates.

The US is 5% of the world population and has 25% of world's prisoners. Black and Latino Americans comprise one-quarter of the US population, but almost 60% of the prison population. African Americans are incarcerated at nearly six times the rate of white Americans.

In terms of the War on Drugs, one might think these disparities could be explained by differences in rates of illegal activity. One would be wrong. The data shows that people of all colours use and sell illegal drugs at very similar rates. When there is a difference by skin colour, the numbers skew towards whites.

Thus, the very same year Human Rights Watch was reporting that African Americans were being arrested and imprisoned at unprecedented rates, government data revealed that blacks were no more likely to be guilty of drug crimes than whites and that white youth were actually the most likely of any racial or ethnic group to be guilty of illegal drug possession and sales.

The fact of incarceration alone is only one piece of the picture. Before incarceration, there is a series of court rulings that have gutted constitutional protections (especially the Fourth Amendment, the right to be free of unwarranted search and seizure), and make it impossible for citizens to argue racial bias in any criminal proceeding. There are draconian mandatory sentencing laws, which lead to the normalization of plea bargaining, in which people who have committed no crime plead guilty to some crime, in order to avoid a life sentence. There are huge financial incentives to municipalities to militarize their police forces, and to states for building -- and filling -- prisons.

After incarceration, the system prevents almost everyone who has been incarcerated from re-entering mainstream life. It is virtually impossible for anyone convicted of a felony to access housing, education loans, or jobs. In most states, formerly incarcerated people are stripped of voting rights and from jury rolls -- forever.

Former inmates, as Alexander writes, "will be discriminated against, legally, for the rest of their lives, denied employment, housing, education, and public benefits.” Right now, about 30% of African American men are automatically banned from jury duty -- for life.

There is a terrible circular logic to the system. As a former US attorney general explained:

Law enforcement officials often point to the racial composition of our prisons and jails as a justification for targeting racial minorities, but the empirical evidence actually suggested the opposite conclusion was warranted. The disproportionate imprisonment of people of color was, in part, a product of racial profiling -- not a justification for it.

In the years following the release of the New Jersey and Maryland data, dozens of other studies of racial profiling have been conducted. A brief sampling:

• In Volusia County, Florida, a reporter obtained 148 hours of video footage documenting more than 1,000 highway stops conducted by state troopers. Only 5 percent of the drivers on the road were African American or Latino, but more than 80 percent of the people stopped and searched were minorities.

• In Illinois, the state police initiated a drug interdiction program known as Operation Valkyrie that targeted Latino motorists. While Latinos comprised less than 8 percent of the Illinois population and took fewer than 3 percent of the personal vehicle trips in Illinois, they comprised approximately 30 percent of the motorists stopped by drug interdiction officers for discretionary offenses, such as failure to signal a lane change. [These discretionary offenses are often an excuse to search vehicles or to arrest people for "resisting".] Latinos, however, were significantly less likely than whites to have illegal contraband in their vehicles.

• A racial profiling study in Oakland, California, in 2001 showed that African Americans were approximately twice as likely as whites to be stopped, and three times as likely to be searched.

Pedestrian stops, too, have been the subject of study and controversy. The New York Police Department released statistics in February 2007 showing that during the prior year its officers stopped an astounding 508,540 people -- an average of 1,393 per day -- who were walking down the street, perhaps on their way to the subway, grocery store, or bus stop. Often the stops included searches for illegal drugs or guns -- searches that frequently required people to lie face down on the pavement or stand spreadeagled against a wall while police officers aggressively groped all over their bodies while bystanders watched or walked by. The vast majority of those stopped and searched were racial minorities, and more than half were African American. . . . .

Although the NYPD attempted to justify the stops on the grounds that they were designed to get guns off the street, stops by the Street Crime Unit -- the group of officers who supposedly are specially trained to identify gun-toting thugs -- yielded a weapon in only 2.5 percent of all stops. . . .

Rather than reducing reliance on stop-and-frisk tactics following the Diallo shooting* and the release of this disturbing data, the NYPD dramatically increased its number of pedestrian stops and continued to stop and frisk African Americans at grossly disproportionate rates. The NYPD stopped five times more people in 2005 than in 2002 -- the overwhelming majority of whom were African American or Latino.

Perhaps the most surprising portion of The New Jim Crow is Alexander's history of the War on Drugs. The "tough on crime" stance that began under President Nixon and intensified under Presidents Reagan and Clinton was born when rates of drug use and crime were low.

Today nearly one-third of African American men are likely to spend time in prison. Once released, they live in a state of permanent second-class citizenship. Alexander builds a case that the War on Drugs was not a response to higher crime rates, but a deliberate plan to dismantle the gains of the civil rights movement. If this sounds unlikely, I highly recommend reading this book.

Alexander has clearly done exhaustive research, but she doesn't exhaust the reader with statistics. Although the numbers are extremely convincing, they are woven into a compelling, readable narrative. It's a disturbing book, as it should be, and an excellent one.


-----
* Amadou Diallo was an African immigrant living in New York City. In 1999, when stopped by the police and asked for identification, he reached for his wallet. Police later said they thought the wallet was a gun. The police shot 41 times. Diallo was 22 years old, and unarmed.

* The Wikipedia article about the Diallo murder contains this:

On March 13, 2015, Capital New York and other news organizations reported that 50 of the 15,000 IP addresses belonging to the NYPD were associated with edits, dating back to 2006, to English Wikipedia articles, including this article on the Amadou Diallo shooting. These IP addresses geolocate to NYPD headquarters at 1 Police Plaza. Detective Cheryl Crispin, a NYPD spokeswoman, said that "the matter is under internal review."