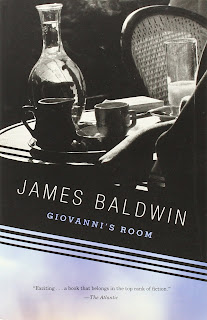 James Baldwin's Giovanni's Room, a landmark in LGBT literature, is one of our library's current "Raves & Faves". The 1956 novel takes place in Paris, narrated by a young American man who is trying to come to terms with his sexuality.

In the past, this was said to be a "gay novel;" now it is seen as "bisexual novel". Leaving aside the obvious fact that novels don't possess sexuality, those labels are interpretation. The narrator himself doesn't have a name for his orientation; for him, neutral, descriptive language doesn't exist.

The story takes place in 1950s Paris, alive with expatriates, in a male subculture that is an open secret. The men who frequent Guillaume's bar are more open than they can be in their hometowns and original cultures, but their lives are still lived largely underground.

Our narrator -- his name is David, but the name is seldom used -- tells the story during a momentous night, one of pain and shame, looking back on the events that led to that night. David is engaged to an American woman, and he desperately wants to fully embrace a conventional life with her. When he falls in love with an Italian bartender named Giovanni, he cannot simply turn away. They have a relationship, and it ends in tragedy.

More than anything, Giovanni's Room is about shame -- what happens to people when their identity, their entire concept of themselves, is considered wrong, dirty, and shameful. What happens to their relationships, what happens, if you will, to their souls.

An older man -- a "queen" and a pathetic person in David's eyes -- gives David this advice, and for me it sums up the meaning of the book.

I looked over at Giovanni, who now had one arm around the ruined-looking girl, who could have once been very beautiful but who never would be now.

Jacques followed my look. 'He is very fond of you,' he said, 'already. But this doesn't make you happy or proud, as it should. It makes you frightened and ashamed. Why?'

Jacques laughed. 'You don't know what he means by friendship but you have the feeling it may not be safe. You are afraid it may change you. What kind of friendship have you had?'

'Or for that matter,' he continued, 'what kind of love affairs?'

I was silent for so long that he teased me, saying, 'Come out, come out, wherever you are.'

And I grinned, feeling chilled.

'Love him,' said Jacques, with vehemence, 'love him and let him love you. Do you think anything else under heaven really matters? And how long, at the best, can it last? Since you are both men and still have everywhere to go? Only five minutes, I assure you, only five minutes, and most of that, hélas! in the dark. And if you think of them as dirty, then they will be dirty — they will be dirty because you will be giving nothing, you will be despising your flesh and his. But you can make your time together anything but dirty; you can give each other something which will make both of you better — forever — if you will not be ashamed, if you will only not play it safe.' He paused, watching me, and then looked down to his cognac. 'You play it safe long enough,' he said, in a different tone, 'and you'll end up trapped in your own dirty body, forever and forever and forever — like me.'

David is tormented by an almost existential inner conflict. Giovanni, on the other hand, feels that David is exaggerating, almost fabricating his troubles. He feels David should be able to love and marry his fiancee, and love men at the same time.

'Well. You are a very charming and good-looking and civilized boy and, unless you are impotent, I do not see what she has to complain about, or what you have to worry about. To arrange, mon cher, la vie pratique, is very simple — it only has to be done.' He reflected. 'Sometimes things go wrong, I agree; then you have to arrange it another way. But it is certainly not the English melodrama you make it. Why, that way, life would simply be unbearable.'

David cannot conceive of this. He can only love Giovanni, and hate him for what he represents, and hate himself for loving this man that he both loves and hates.

Giovanni had awakened an itch, had released a gnaw in me. I realized it one afternoon, when I was taking him to work via the Boulevard Montparnasse. We had bought a kilo of cherries and we were eating them as we walked along. We were both insufferably childish and high-spirited that afternoon and the spectacle we presented, two grown men jostling each other on the wide sidewalk and aiming the cherry pits, as though they were spitballs, into each other's faces, must have been outrageous. And I realized that such childishness was fantastic at my age and the happiness out of which it sprang yet more so; for that moment I really loved Giovanni, who had never seemed more beautiful than he was that afternoon. And, watching his face, I realized that it meant much to me that I could make his face so bright. I saw that I might be willing to give a great deal not to lose that power. And I felt myself flow toward him, as a river rushes when the ice breaks up. Yet, at that very moment, there passed between us on the pavement another boy, a stranger, and I invested him at once with Giovanni's beauty and what I felt for Giovanni I also felt for him. Giovanni saw this and saw my face and it made him laugh the more. I blushed and he kept laughing and then the boulevard, the light, the sound of his laughter turned into a scene from a nightmare. I kept looking at the trees, the light falling through the leaves. I felt sorrow and shame and panic and great bitterness. At the same time — it was part of my turmoil and also outside it — I felt the muscles in my neck tighten with the effort I was making not to turn my head and watch that boy diminish down the bright avenue. The beast which Giovanni had awakened in me would never go to sleep again; but one day I would not be with Giovanni anymore. And would I then, like all the others, find myself turning and following all kinds of boys down God knows what dark avenues, into what dark places?

With this fearful intimation there opened in me a hatred for Giovanni which was as powerful as my love and which was nourished by the same roots.

Interestingly, this is Baldwin's only novel where all the characters are white. In the 1950s, writing about men loving men was already wildly controversial and taboo. Adding colour to the equation was impossible. In those days, any novel featuring African-Americans was by definition "about" being black in America -- "the Negro question," as it was then known. The only way to make this book "about" being gay or bisexual, was to keep all the characters white, so colour could not be read as a factor.

Baldwin's writing is elegant and beautiful. The action of the story is very simple, which helps frame David's tumultuous inner life. The book is short, and it reads quickly -- but it is memorable and haunting.
Posted by laura k at 4/22/2017 01:15:00 PM