what i'm reading: a mother's reckoning by sue klebold 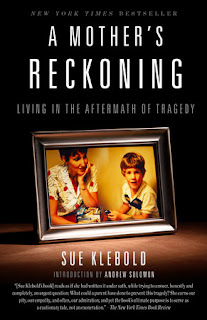 On April 20, 1999, Dylan Klebold and Eric Harris, two teenagers from Littleton, Colorado, marched into Columbine High School with explosives and automatic weapons. Their plan to blow up the entire school failed -- only because their homemade bombs did not explode -- so they walked around the school shooting people. They killed 12 students and one teacher, wounded 24 others, and unleashed untold mental suffering on their entire community, before killing themselves.

I very clearly remember hearing about this, and just as clearly remember thinking that the Klebold and Harris families had suffered the worst tragedy of all. What could be worse than your child dying in a school shooting? To me, the answer is all too obvious: knowing your child took the lives of other children. I remember, too, feeling so sad and discouraged when some Columbine parents refused to allow Klebold and Harris to be memorialized along with the other victims, insisting the memorials acknowledge 13 dead, not 15.

When I saw a book review and noticed the author's last name, I knew instantly who she was, and immediately put the book on hold at our library. This is a rare opportunity to look behind the scenes at the bizarre phenomenon of mass shootings, from a perspective of kindness and mercy.

In the first half of the book, Sue Klebold details the day of the shooting, and the days and weeks that followed, from her own perspective. In the second half, she writes about her journey to try to understand her son's actions, and her long-term survival, as she finds community -- in this case, survivors of suicide loss -- and becomes a suicide-prevention activist. Her writing is vivid and intensely emotional. Some parts of this book are so raw and laden with such pain that they are barely readable. Reading this book sometimes feels like peering too deeply into someone's most private heart.

Throughout, Klebold is meticulously careful to explain that seeking to understand what her son did does not mean she is excusing it. Again and again, she writes that Dylan was responsible for his own actions and that probing his mental illness does not negate that. She writes this so often, as though she wants anyone who opens the book to any random page to read this. I found it very sad that she felt she needed to do that -- but her story makes it obvious why she did.

It did not surprise me to learn that almost everything written or said in the media about the Klebold family was completely wrong. This book is clearly, in part, an attempt to set the record straight, or at least get another perspective in the public view. And again, when one reads what was said versus what actually existed, the writer's desire to do this is very understandable.

The book is suffused in regret. Sue Klebold remembers every instance, every tiny moment, where she chided or nagged when she could have hugged, when she said, "Get yourself together!" instead of "How can I help you?" Yet these instances, as she recounts them, are so ordinary, so commonplace. She was a loving mother and if at times she was irritated with or tough on her teenage son, it was all within the bounds of normalcy.

One might say that Dylan Klebold exhibited no signs of depression or other mental illness before the shooting. Sue Klebold emphatically rejects this idea, and insists there were signs, but she and Dylan's father didn't know how to read them.

I cannot agree. I didn't think any of the instances she recounts were a red flag for such violence, nor did there seem to be a pattern. All the behaviour seemed like that of a normal, if somewhat troubled, teenager -- and "troubled teenager" can be a redundancy. After reading this book, I believe the only way Sue and Tom Klebold could have known that their son was at risk for violence is if they had constantly searched his room -- something they had no cause to do and an act that might have driven him further out of reach.

When Sue Klebold read her son's journals (found by police) and saw the videos the two boys made, she felt as though she was looking at a total stranger. Dylan Klebold led two lives. As some supportive letter-writers told Sue Klebold, if someone really wants to hide something, they will. (Eric Harris is a different story. There were many clear signs.)

I knew that many Columbine families blamed the parents for the boys' actions, which strikes me as strange, cruel, and grossly unfair. Because of that, I was very heartened to know that the Klebolds received thousands of letters of sympathy and support -- from people whose children had committed atrocities, from survivors of suicide loss, from victims of bullying who thought it lucky incidents like this don't happen more often. Many people understood the family's pain and wanted them to know they were not alone. I took great relief from this.

The latter portion of the book is largely about suicide prevention, and recognizing the signs of clinical depression in children and teens, which are different than in adults. Klebold calls for nothing less than an entirely new approach to mental health.

This is a very sad book, but in the end, it's a book about survival. Sue Klebold lived through a tragedy of immense proportions. She chose to survive and, eventually, found a way to create meaning from her loss. Her book is sure to help many other people do that, too.
Posted by laura k at 3/19/2017 05:00:00 AM