what i'm reading: the evil hours, a biography of post-traumatic stress disorder 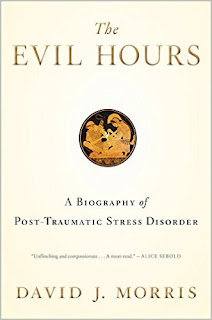 The Evil Hours: A Biography of Post-Traumatic Stress Disorder is an outstanding book -- meticulously researched, but written in a compelling, accessible style, and with great humanity and compassion.

Author David J. Morris unearths the social and cultural history of post-traumatic stress disorder (PTSD), the fourth most common psychiatric disorder in the US. He surveys the potential treatments. He explores the role of social justice in our understanding of PTSD.

But above all, Morris confronts the meaning of trauma, in society and in his own life. Morris was a U.S. Marine stationed in Iraq. After narrowly escaping death, he returned home questioning everything he thought he knew -- and eventually having to face the reality of his own trauma. Morris' dual role as both researcher and subject give this book a unique power as history, social science, and personal essay.

People have known for centuries, for millennia, that traumatic events produce after-effects, but different cultures in different eras have explained those effects in different ways. The modern history of trauma is linked to the carnage of 20th Century war. And our current understanding of PTSD owes everything to the Vietnam War, and the experience of returning veterans who publicly opposed the war.

In this way, the history of PTSD encompasses a history of 1960s and 1970s peace activism, especially of the Vietnam Veterans Against the War, a group that began a sea-change in the culture of the United States. As a student of peace, I found this part fascinating.

Taking this even further, Morris links PTSD and social justice. Powerless and marginalized people are more likely to be traumatized by one or more of the four principal causes of PTSD: war, genocide, torture, rape. Taking a social and cultural perspective forces us to confront a world that causes these traumas. In this view, PTSD is not so much an illness as a moral condition brought on by the worst of human society.

The United States Veterans Administration (VA) sees it quite differently. To the VA, PTSD is strictly a medical condition. And this matters greatly, because research about PTSD is almost entirely funded and controlled by the VA. Explaining trauma as purely medical or biological doesn't address the causes at all. In fact, it does the opposite -- it normalizes PTSD as a natural consequence of unavoidable circumstances.

As for treatment, Morris surveys what's out there and finds most of it useless. VA hospitals and insurance companies prefer therapies that can be "manualized" -- made uniform, with a certain number of treatments and little or no emotional engagement from the therapist. Statistically, these types of therapies appear to be useful -- until one learns that the numbers don't include all the patients who drop out! Talk about cooking the books: everyone for whom the treatment isn't working or, in many cases, is actually worsening their symptoms, is simply ignored.

Morris himself feels that therapeutic talks with an empathetic person with some training goes further than neuroscience can. "What they [the VA] seem to want instead," Morris writes, "is mass-produced, scalable, scripted therapies that make for compelling PowerPoint slides."

Readers of this blog may know that I have PTSD. Much of The Evil Hours brought a shock of recognition -- the feeling that someone else is expressing your own thoughts, saying exactly what you've been thinking all along. Morris perfectly articulates how trauma plays out in one's life, the depths of change it brings about.

Morris writes: "We are born in debt, owing the world a death. This is the shadow that darkens every cradle. Trauma is what happens when you catch a surprise glimpse of that darkness.”

In the immediate aftermath of my own trauma, while trying to write about my experience, this is exactly the image I fixated on. We are, all of us, dancing on the edge of a great precipice, usually unaware of how terrifyingly close we are to that edge. Then something happens, and we understand it, not in some theoretical way, but immediately and profoundly, perhaps in a way humans are not equipped to understand. We talk about "the fragility of life" but we don't know what that is -- until we do. Then we spend a lifetime trying to live with the knowledge.

"One of the paradoxes of trauma," writes Morris, "is that it happens in a moment, but it can consume a lifetime. The choice of how much time it is permitted to consume is usually in the hands of the survivor."

The Evil Hours may be very useful for people who are figuring out how to stop PTSD from consuming any more of their lives. It is certainly a must-read for anyone interested in the effects of trauma on the human mind.
Posted by laura k at 9/19/2016 05:00:00 AM