This is The Proclamation.

The Proclamation was read by Padraig (Patrick) Pearse outside the General Post Office in Dublin on April 24, 1916. This marked the beginning of the Easter Rising.

Rather less dramatically, a copy of the Proclamation has hung on my office wall since our trip to Ireland in 2001. It has lived large and present in my revolutionary heart since the early days of my fascination with Irish history.

Last week I had the pleasure of hearing the entire Proclamation read out loud by Toronto labour activist Mike Seaward. It was nothing short of thrilling to hear these stirring words ring out - words to live by. For the men who wrote them, they were words to die by.

The reading of the Proclamation kicked off the 2016 Marxism conference special event, commemorating 100 years since the Easter Rising, almost to the day. This was followed by Canadian labour leader and activist Sid Ryan, spinning out Irish history in sparkling prose and stunning detail, without a scrap of paper in front of him. Sid was followed by Carolyn Egan, a leader in the Canadian women's and labour movements, and my comrade in both the International Socialists and the War Resisters Support Campaign. Carolyn highlighted some of the more radical and revolutionary ideals of the ongoing battle for Irish independence, and connected those back to our current times.

The Easter Rising was many things. It was the first crack in the British Empire. It was the culmination of 600 years of oppression under British rule, and 600 years of armed insurrection against it. It was the wild utopian yearnings of poorly trained rebels, a death sentence for the men who signed it. It is a touchstone for every Irish nationalist, to this day.

The Easter Rising might have been an obscure moment in history, as so many rebellions are. The British government itself ensured the Rising's significance with one giant blunder: the execution of the leaders. With those murders, public opinion turned from irritation or indifference to wild anger and support.

At Marxism 2016, Sid Ryan and Carolyn Egan held a Marxist lens to this largely nationalist rebellion. It isn't difficult to do so, embodied by James Connolly, the great Irish thinker and socialist revolutionary.

James Connolly was an extraordinary leader. His counterpart in American history might be Frederick Douglass. Both rose from extreme poverty (in Douglass' case, slavery), had no formal education, and became extraordinary thinkers and orators. Both were radical, egalitarian, open-minded, and committed to justice. Both supported women's rights. Both understood that the struggle was bigger than their people, not Black against White or Irish against British, but the people against the ruling class. Both men rejected any solution that was in reality only a change of masters.

I won't try to recreate the talk here; I'm hoping it will be posted on the IS's YouTube channel. Unfortunately for me, this was the only talk I was able to attend at Marxism 2016. I also participated on a panel called "Union Organizing in a Time of Precarity," with two labour-activist friends. 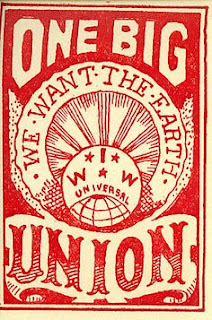 There's a lot about James Connolly online, but this piece by Ella Whelan is powerful and poignant, and in my view the most accurate: James Connolly: We Only Want the Earth: What We Can Learn from the Easter Rising, by Ella Whelan. I noticed this beautiful emblem from the IWW bears that line from one of Connolly's poems. I love that my hero of Irish history organized with the revolutionary group that lives in my heart.

IRISHMEN AND IRISHWOMEN: In the name of God and of the dead generations from which she receives her old tradition of nationhood, Ireland, through us, summons her children to her flag and strikes for her freedom.

Having organised and trained her manhood through her secret revolutionary organisation, the Irish Republican Brotherhood, and through her open military organisations, the Irish Volunteers and the Irish Citizen Army, having patiently perfected her discipline, having resolutely waited for the right moment to reveal itself, she now seizes that moment, and supported by her exiled children in America and by gallant allies in Europe, but relying in the first on her own strength, she strikes in full confidence of victory.

We declare the right of the people of Ireland to the ownership of Ireland and to the unfettered control of Irish destinies, to be sovereign and indefeasible. The long usurpation of that right by a foreign people and government has not extinguished the right, nor can it ever be extinguished except by the destruction of the Irish people. In every generation the Irish people have asserted their right to national freedom and sovereignty; six times during the past three hundred years they have asserted it in arms. Standing on that fundamental right and again asserting it in arms in the face of the world, we hereby proclaim the Irish Republic as a Sovereign Independent State, and we pledge our lives and the lives of our comrades in arms to the cause of its freedom, of its welfare, and of its exaltation among the nations.

The Irish Republic is entitled to, and hereby claims, the allegiance of every Irishman and Irishwoman. The Republic guarantees religious and civil liberty, equal rights and equal opportunities to all its citizens, and declares its resolve to pursue the happiness and prosperity of the whole nation and of all its parts, cherishing all of the children of the nation equally, and oblivious of the differences carefully fostered by an alien Government, which have divided a minority from the majority in the past.

Until our arms have brought the opportune moment for the establishment of a permanent National Government, representative of the whole people of Ireland and elected by the suffrages of all her men and women, the Provisional Government, hereby constituted, will administer the civil and military affairs of the Republic in trust for the people.

We place the cause of the Irish Republic under the protection of the Most High God, Whose blessing we invoke upon our arms, and we pray that no one who serves that cause will dishonour it by cowardice, inhumanity, or rapine. In this supreme hour the Irish nation must, by its valour and discipline, and by the readiness of its children to sacrifice themselves for the common good, prove itself worthy of the august destiny to which it is called.

Signed on behalf of the Provisional Government: