what i'm reading: the invention of air by steven johnson 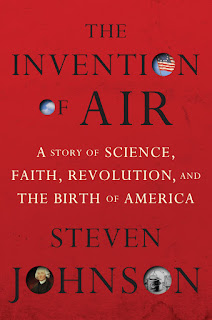 How do we know that the oxygen exists, and that oxygen is different from carbon dioxide? Well, we know it because we've been taught those facts. But how did that knowledge enter the scientific record? Air is invisible to our eyes. How did humans first understand that invisible gases exist, and have predictable properties?

Answering that question, The Invention of Air: A Story of Science, Faith, Revolution, and the Birth of America by science historian Steven Johnson, is at its most interesting. The body of experiments that led to the "discovery" of oxygen, carbon dioxide, the properties of gases, and other foundational principles of chemistry were completely unknown to me. (Indeed, I doubt I had ever considered the question.)

This book introduced me to one Joseph Priestley, considered the father of modern chemistry, and a towering thinker of his era, yet largely unknown to the public today.

As Priestley was a contemporary of several of the American "founding fathers", the author illustrates Priestley's importance with these statistics.

In their legendary thirteen-year final correspondence, reflecting back on their collaborations and their feuds, Thomas Jefferson and John Adams wrote 165 letters to each other. In that corpus, Benjamin Franklin is mentioned by name five times, while George Washington is mentioned three times. Their mutual nemesis Alexander Hamilton warrants only two references. By contrast, Priestley, an Englishman who spent only the last decade of his life in the United States, is mentioned fifty-two times.

One reason (of many) that Johnson greatly admires Priestley was that he valued open inquiry and the sharing of knowledge more than personal credit or financial gain. Priestley was a dedicated open-source man. He would share his ideas, writing, and data with anyone who was interested. This probably resulted in less fame, and definitely resulted in less income, but those were not Priestley's goals.

The Invention of Air is much more than a biography of Priestley or an account of his experiments. Priestley's work helped define and solidify scientific method, and his political and religious ideas influenced the birth of the American republic. I found these areas more challenging and less interesting. Johnson assumes a degree of knowledge of the history of science that I lack. And the book gets bogged down in biographical detail that seems trivial or irrelevant.

I loved Johnson's The Ghost Map - I'm at least partly responsible for it being promoted widely in our library system - and I've enjoyed (on Netflix) several episodes of Johnson's PBS series, "How We Got to Now". So it was a little disappointing not to love this book, too. But The Invention of Air is often fascinating, and it's well worth the read.

As I did when I reviewed Soul Made Flesh, I caution readers about grisly details of experiments on animals.
Posted by laura k at 1/31/2016 01:00:00 PM