what i'm reading: ghettoside: a true story of murder in america 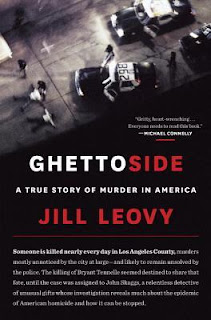 When we think of gun violence in the United States, chances are we think of mass shootings. These horrific events which occur with such regularity seem, to much of the world, mostly preventable. The public nature of the shootings, and the often tragically young age of the victims, capture headlines and a good portion of the 24-hour news cycle.

Yet murders occur every day in the US, and no one hears about them, except the grief-stricken loved ones and those who fear they may be next. Jill Leovy's Ghettoside: A True Story of Murder in America is about those murders - both one specific tragedy and what Leovy calls "the plague" itself.

Part sociology and part detective story, Ghettoside is a triumph of reporting, of analysis, and of compassion. This book is disturbing and extremely compelling, and it may change forever how you view both violence and the criminal justice system's response to it.

Leovy is a crime reporter for the Los Angeles Times, and the plague she investigates is the murder of mostly African-American men mostly by African American men. It is this "black on black" violence that the media ignores, that the public never hears about, and of which thousands of people live in fear. It's a subject that's difficult to talk about, ignored for reasons both admirable (not wanting to be racist) and abhorrent (actual racism). The racism that often underlies any discussion of this epidemic draws two conclusions: one, that black people are inherently violent and cannot be controlled, and two, that the victims are not important. Leovy demonstrates how this pattern has been repeated throughout American history. While both conclusions are obviously wrong, few alternate theories exist, so the subject is largely ignored.

The murder of African American men is justly called an epidemic. African Americans make up just 6% of the US population, but are nearly 40% of all homicide victims. Homicide is the number one cause of death of African-­American males ages 15 to 34. And that statistic doesn't count the victims left paralyzed, or with traumatic brain injury, the cases known in this world as "almocides".

In a time when attention is finally being focused on police violence against African Americans, Leovy makes a bold assertion: African Americans suffer from too little criminal-justice resources. And what resources are devoted to their homicides are the wrong kind, with the wrong focus.

This is a book about a very simple idea: where the criminal justice system fails to respond vigorously to violent injury and death, homicide becomes endemic.

African Americans have suffered from just such a lack of effective criminal justice, and this, more than anything, is the reason for the nation's long-standing plague of black homicides. . . . The failure of the law to stand up for black people when they are hurt or killed by others has been masked by a whole universe of ruthless, relatively cheap and easy 'preventive' strategies. . . . This is not an easy argument to make in these times. Many critics today complain that the criminal justice system is heavy-handed and unfair to minorities. . . . So to assert that black Americans suffer from too little application of the law, not too much, seems at odds with common perception. But the perceived harshness of American criminal justice and its fundamental weakness are in reality two sides of a coin. Like the schoolyard bully, our criminal justice system harasses people on small pretexts but is exposed as a coward before murder. It hauls masses of black men through its machinery but fails to protect them from bodily injury and death. It is at once oppressive and inadequate.

Leovy guides the reader on a journey through a culture sure to be foreign to most readers, by following the solving and prosecuting of one murder, a murder that struck the heart of the L.A. police community: a homicide detective's son.

Along the way we witness the unending and almost unbearable grief of families who have lost loved ones to the plague. Their pain is compounded by the near-total absence of media attention, the reflexive victim-blaming that labels these deaths "gang-related violence", and the useless platitudes that surround this epidemic.

People often assert that the solution to homicide is for the so-called community to "step up". It is a pernicious distortion. People like [a key witness] cannot be expected to stand up to killers. They need safety, not stronger moral conviction. They need some powerful outside force to sweep in and take their tormentors away. That's what the criminal justice system is for.

In Ghettoside, the potential of this "powerful outside force" is personified by a few homicide detectives for whom the words dedicated and hard working are grossly inadequate. They are obsessive and heroic. The book's central hero is a detective named John Skaggs.

Skaggs bucked an age-old injustice. Forty years after the civil rights movement, impunity for the murder of black men remained America's great, though mostly invisible, race problem. The institutions of criminal justice, so remorseless in other ways in an era of get-tough sentencing and "preventive" policing, remained feeble when it came to answering for the lives of black murder victims. [Detective Skaggs'] whole working life was devoted to one end: making black lives expensive. Expensive, and worth answering for, with all the force and persistence the state could muster. Skaggs had treated the murder of [one young black man] like the hottest celebrity crime in town.

Seeing these men at work, it becomes obvious that if their vigor and determination were replicated at all levels of the criminal justice system, the plague would wither and die. Yet so few resources are devoted to this endeavour that the detectives are forced to buy their own office equipment.

One persistent and eye-opening theme of Ghettoside is how many homicides cannot be solved because of widespread witness intimidation. Witnesses fear for their own lives, and very rightly so, but fear more for the lives of their parents and children. Retaliation killings are commonplace. Again, the lack of resources devoted to African American homicides, as the legal/judicial system utterly fails the courageous witnesses who do testify. So unsolved murders give rise to more unsolved murders, and on it goes.

Another poignant theme are the scores of young men who desperately want out of the gangs, but who - literally - cannot get out alive. Many of them never wanted to join gangs in the first place, but were forced to choose an identity for survival. This way, Leovy shows us that every murder victim is an innocent victim - every single one. As a detective, standing over the body of a murdered sex worker, says: "She ain't a whore no more. She's some daddy's baby."
Posted by laura k at 11/28/2015 08:00:00 AM