what i'm reading: dead wake: the last crossing of the lusitania by erik larson 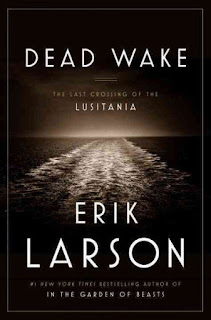 On May 7, 1915, the gigantic luxury ocean liner Lusitania - an engineering marvel, the fastest ship of its era - was hit by a torpedo shot from a German "U-boat" submarine. The ship had nearly completed its crossing from New York and was in sight of the Irish coast.

Eighteen minutes later, the Lusitania had sunk. 1,198 passengers and crew, including three German stowaways, were gone. Only six of the ship's 22 lifeboats had been launched. Many passengers drowned because they had put their life-jackets on wrong, so their feet waved in the air while their heads were held underwater. The passenger list included an unprecedented number of infants and children, including several large families. 764 people survived, including the ship's captain.

Before reading Erik Larson's Dead Wake, I knew nothing about this incident. I might have vaguely known that it had something to do with World War I, perhaps not even that. So for me, this book was a revelation, and I think most readers would agree.

I found the chapters on the German side particularly fascinating. Most of us know something about travel on the glorious ocean liners of that era, from all the Titanic lore. But I'm sure I'm not alone in knowing nothing about submarine technology of that time. The conditions on the U-boats were beyond grueling, and so dangerous that early forays were suicide missions. Reading Dead Wake, I developed an unexpected sympathy for the U-boat captain and crew, despite knowing that they were preying on undefended civilians. This is a tribute to Larson's considerable skill.

Larson is an absolute master of literary nonfiction. He established his reputation in 2003 with Devil in the White City, about a hunt for a serial killer during the Chicago Exposition of 1893. I haven't read his other books, but White City is a true page-turner, and Dead Wake is even better.

Many things about the sinking of the Lusitania remain unsolved and controversial. To those ends, Larson presents new evidence suggesting that British naval intelligence knew, and possibly even expected, the attack, but allowed it to happen to give the United States a pretext for joining the war then raging in Europe and elsewhere. According to this review, Lusitania buffs will encounter nothing new. But how many of us are Lusitania buffs? For everyone who is not, this book will be richly rewarding.
Posted by laura k at 10/25/2015 09:30:00 AM