what i'm reading: what's a dog for by john homans 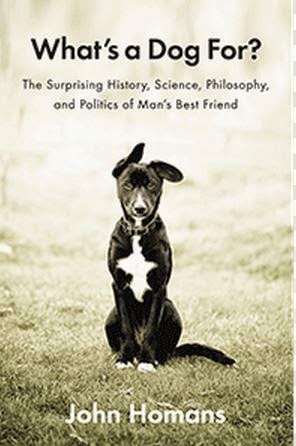 John Homans' What's a Dog For? The Surprising History, Science, Philosophy, and Politics of Man's Best Friend is my kind of dog book. I don't care for memoirs of heartwarming doggie hijinks or heartbreaking rescue odysseys. I've lived those stories myself, and books of that sort don't advance my knowledge of the species I've shared most of my life with. I am endlessly fascinated by canine behaviour - by what we know, and don't know, about dogs. So is John Homans. Homans is the executive editor of New York magazine, and before he adopted his lab-mix Stella, was a relative novice about dogs and the human cultures that surround them. He became curious... and so we have this very informative and entertaining book.

What's a Dog For? is a survey of canine science to date, and a history of the evolution of humans' relationship to the domesticated canine (that is, humans in one part of the world). Homans describes new trends in canine science, introducing readers to the proponents and detractors of the "convergence" theory, which holds that living so closely among humans has changed the dog's brain and made it more like humans. This type of study, Homans says, "is intended to shed light not only on what makes dogs dogs but also on what makes people people." Much is made over a dog's ability to understand a pointing motion, something even chimpanzees and other non-human primates can't do. Anyone who has marvelled at how their dog seems to read their mind will enjoy the analysis of this seemingly simple communication.

As the title says, What's a Dog For? is also a book about history and politics. Homans walks us through the evolution of attitudes towards dogs in our society, from the days of rampant and brutal experimentation (much of it with no scientific value), to the mania of inbreeding for specific appearances, to the mass euthanizations of "the pound" (thought to be humane in its day), to no-kill shelters, spay-neutering awareness, and the current culture of rescue and adoption. The book is not a polemic, and the most disturbing parts of that history are merely stated, not described in gory detail. But What's a Dog For? is definitely a book with a point of view - not a radical point of view, but one that many readers will find enlightened and perhaps a bit provocative.

Homans sometimes oversimplifies and stretches reality to make a point. In researching Stella's roots, Homans discovers what he calls a North-South, or red-state-blue-state, divide, between the US states where lax animal-cruelty laws reflect regressive attitudes towards animals, and states that supposedly protect animals. In the world of dog-rescue, this amounts to supply and demand: a large number of dogs are rescued from puppy-mills in Tennessee, Kentucky, and other Southern states to be adopted in Northern states.

While that last part is true, it is only part of the picture. In order to make his animal-cruelty story work, Homans writes, "If we leave out pit bulls...", thus negating an egregious form of cruelty to dogs, which takes place all over the US, in both urban and rural areas. Homans adheres to the red-state-blue-state divide as if he doesn't know that New York City may be blue, but the rest of New York State is red, or that rural California between the Bay Area and Los Angeles does not exist. Pennsylvania, a northern state, was the puppy-mill capital of the US not very long ago. It's not necessary to paint "the South" as an ignorant backwater and "the North" as the land of enlightenment; neither is accurate. Having lived most of my life in the US, I find that dichotomy a bit ridiculous, and I wish Homans hadn't framed a big segment of his story around it.

These criticisms aside, What's a Dog For? has much to recommend it. Charles Darwin and Jane Goodall both figure into the story, as does Pavlov, but the reader is introduced to the work of many anthropologists, psychologists, and animal behaviourists who are not household names, who are advancing our knowledge of both canines and ourselves. The history of dog breeding, of the now-defunct high-kill shelters, and of the animal-rescue movement, is a hopeful one. Here in North America, it's an unfinished story, and in much of the world, it has yet to begin.

I didn't always agree with Homans' conclusions, but I'm grateful for his curiosity. He's unpacked many fascinating stories and tied them together in an excellent book.
Posted by laura k at 5/01/2014 04:00:00 AM