enbridge line 9: all pain and no gain for ontario, quebec, and new england 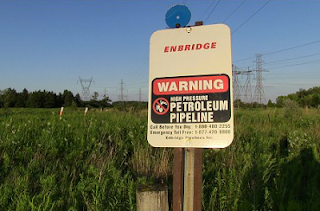 Have you heard about Line 9?

Enbridge has begun a process that would create a third option to get their dirty tarsands oil out of Alberta to sell to the rest of the world. The Keystone XL pipeline would stretch from Alberta to Nebraska. (Gee, what could go wrong?) The Northern Gateway pipeline would see, impossibly, huge supertankers threading through the rocky, island-dotted British Columbia coast. (Another no-brainer.)

Under this third plan, Enbridge would reverse the flow in two existing pipelines - Line 9 and the Portland-Montreal Line. Oil would flow from Alberta through Sarnia, Ontario, onto Hamilton and the Greater Toronto Area, into Quebec, through Montreal, and down into New England, ending in Casco Bay in Portland, Maine - approximately 1200 kilometres (750 miles), through the most densely populated area of Canada, through the sources of drinking water for millions of people. The route passes through 99 towns and cities and 14 indigenous communities.

To quote NRDC, "...the dirtiest oil on the planet" would be carried "through some of the most important natural and cultural places in Ontario, Quebec, Vermont, New Hampshire, and Maine." Note that the oil flowing through that pipeline - diluted bitumen - is more dangerous than conventional oil, and spills more often.

Together, these three pipeline plans have the potential to devastate an enormous swathe of North America. All for the profit of a corporation and its shareholders.

The National Energy Board of Canada has already approved the reversal of Line 9 and work on the initial phase has begun. This affects your environment, your drinking water, your health. Were you consulted??

City councils in Hamilton, Burlington, Mississauga, and Toronto have passed motions requesting more information or attempting to get involved in the approval process.

I hope you will read more about Enbridge's Line 9 plan. Get informed, and in any way you can, get involved. You don't need to become a full-time environmental activist to make a difference. A huge, collective "NO!" stopped plans to convert a big piece of Ontario farmland into an enormous quarry. Stopping Enbridge is a bigger task, but so much more is at stake.

Our drinking water, our natural resources, our farmland, our wildlife, our coastline, our health are all more important than "good oilsands PR" and the dividends of Enbridge shareholders.

If you need more information about the tarsands, and how they produce the dirtiest oil on the planet, I highly recommend the film H2Oil. Watch a trailer here, and look for it at your public library.
Posted by laura k at 1/04/2013 06:00:00 AM