in which the "no third dog rule" is happily thrown away: introducing boomer! 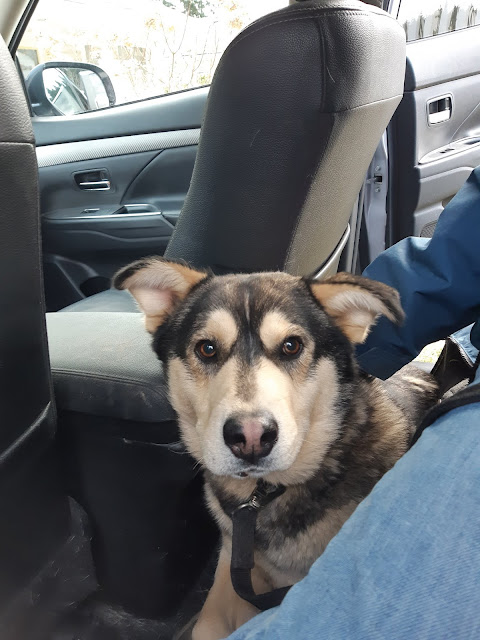 This handsome boy is Boomer, the newest addition to our family. I saw him a couple of times outside the library, scrounging food. He was quiet and meek, friendly but very cautious. A library regular -- the person who used to have Cookie -- told me folks have been calling him Boomer. Allan and I couldn't agree on a different name, so Boomer he is. 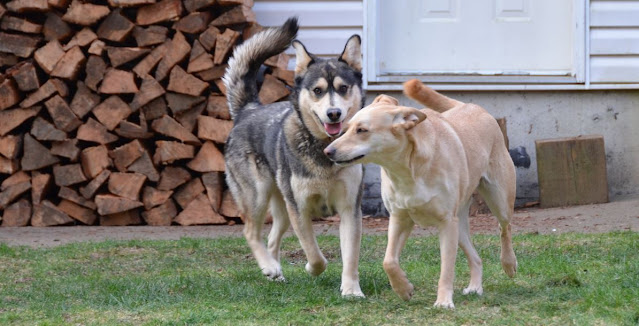 He's less than a year old. I'm guestimating seven to nine months; we'll know more after his first visit to the vet in a few days. It's likely that he had never been in a car or a house before today.

I checked around to make sure he was not anyone else's dog, and broached the idea at home. We've always had a strict "no third dog" rule! If one of us was melting over a pup, the other one had to be strong. (We did briefly have Diego, Kai, and Cookie, but Diego was old; we knew that was temporary.) But, as I reminded Allan, we were renters then. Finding rentals with two dogs was difficult enough. We knew we could never have three!

But now we own our own home. We have the space, and we have the means... so why not?

It's been very cold lately, and I couldn't get Boomer out of mind, knowing he was sleeping outside so nearby. This morning we drove down to the reserve, and we saw him right away, playing with another dog. We brought some food and fed bits to both of them.

A woman came out of her house, wanting to know what we were doing. The second dog was hers, and she was concerned. There is often suspicion between Indigenous and non-Indigenous people here, until introductions are made and intentions are established. (Very understandable!)

I told her we were a friend of [Cookie's former person], and this dog had been in town, and we are hoping to take it in. She said again that one dog was hers, and brought it inside, and said she doesn't know the other dog (Boomer), but she has seen him on his own many times. She and her partner both wished us luck and we all exchanged friendly goodbyes. 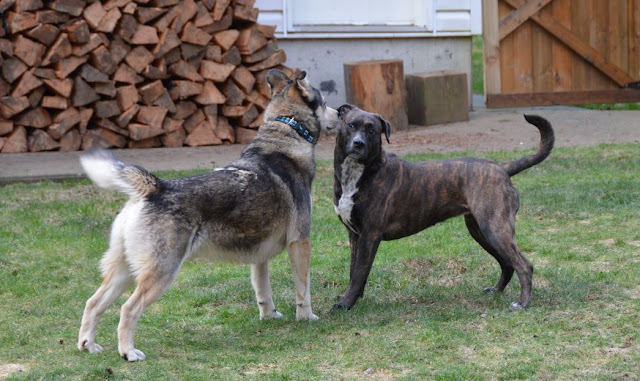 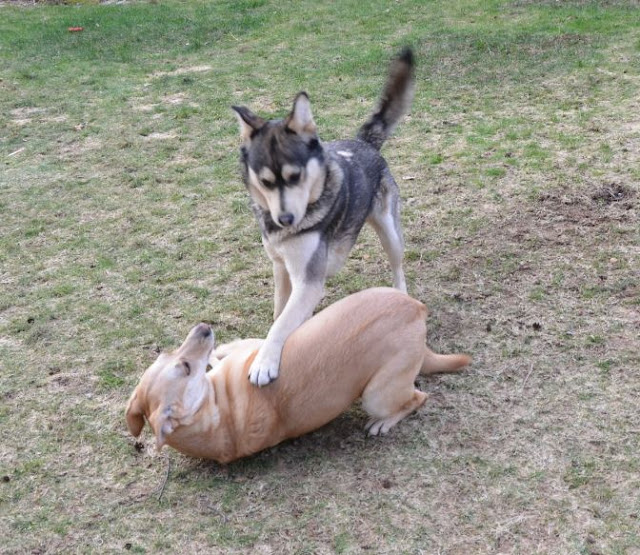 With the other dog gone, we continued feeding Boomer bits of sardines, petting him, and calling him by name. He was shy and cautious, moving away when we tried to put a collar on him, and not wanting to put a paw in the car, even to retrieve food.

Allan had the brilliant idea to try walking him on the leash -- and lo and behold, Boomer really seemed to like that! Allan and Boomer walked down the street, and I drove slowly beside them -- and that made all the difference. Allan took Boomer in the back seat, and we drove home! 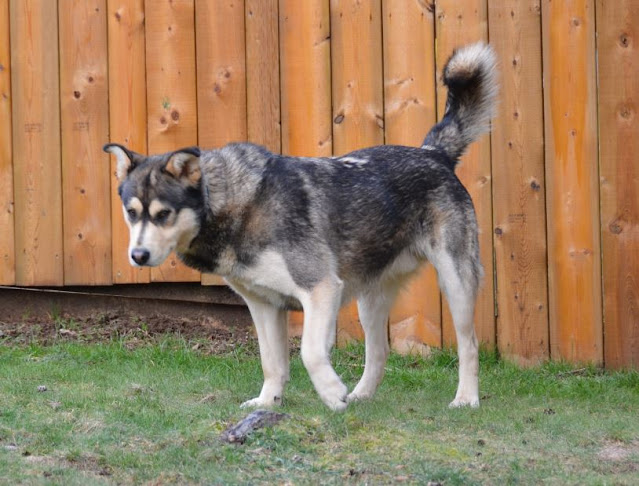 We took Boomer in the backyard, and Kai and Cookie came barrelling out, full tilt. Naturally Boomer ran for the hills -- just as Cookie did when she first met Diego and Kai. But in a few moments, they were sniffing each other, then came the play bows, and within 30 seconds of meeting, they were all playing together. Cookie seemed overjoyed, repeatedly leaping up on me and Allan, which is very unusual. 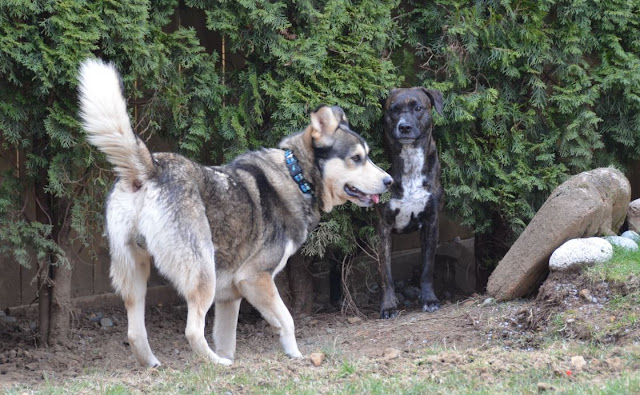 They ran and played for a while, then we took Boomer -- who was quite fragrant -- for a bath at the nearby dog wash. (It's so weird, what this town has and doesn't have!) Allan walked there with Mister Boomer on the leash, and I drove over. Boomer was pretty freaked out about the bath, but he accepted it, then we drove home with man and dog together in the back seat.

I can already see that Allan is Boomer's special guy. In my experience, dogs develop a very deep bond with the first person in on the rescue. That was the case with me and Buster, to an extreme degree, since he was near death on the street when I found him, and it is certainly the case with me and Cookie. I can see Boomer is already a bit more attached to Allan than to me. 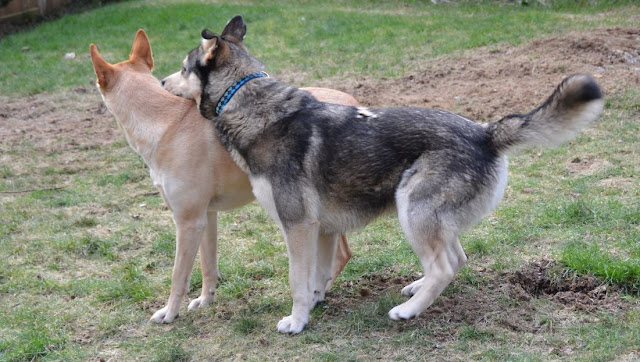 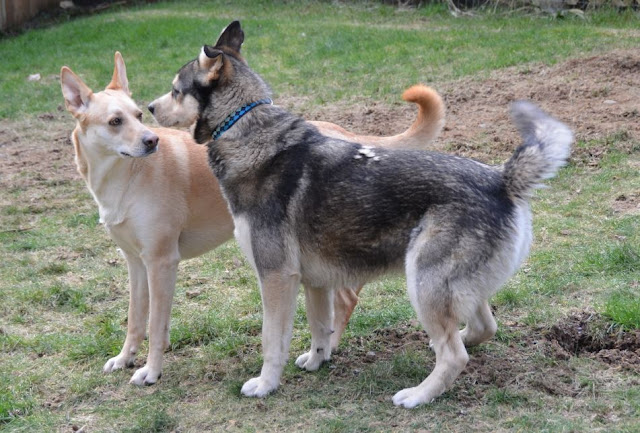 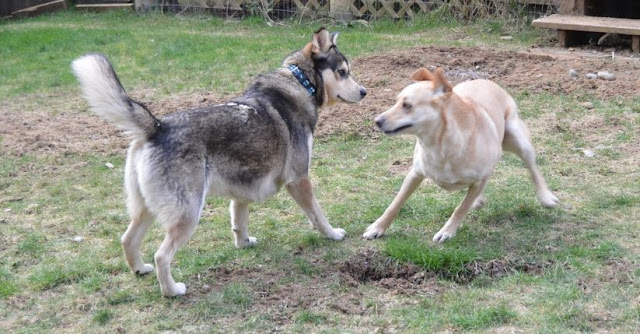 I am so happy for all of you. What a lucky dog Boomer is! And I love the lawyerly approach to changing your no third dog rule. Distinguish the facts and the rule must be reinterpreted. :)

I think scritching the top of his head did it. He'd start to half-close his eyes a little bit and I could feel him lean a bit more against me.

He really perked up when we started walking. It was interesting, assuming he's likely not been a leash very much, if at all.

The Port Hardy Dog Wash? Mein Gott! What next? I seem to recall a mobile dog wash & groom that operated in our town a few years ago.

LOL I had no intentions of being lawyerly. Who knew? :)

Yeah, Port Hardy doesn't have a laundromat or a dryclearner, or a real pub, but it has a dog wash! In typical North Island fashion, the sign says "The dog wash will be open and closed at various times during the day. If you can't get in, call this number."

Laura, it's called "island time" and it kicks in once you can no longer see Nanaimo in the rear view. When I moved from the mainland I hired some trades to do a bit of wiring, plumbing, etc. That's when I learned that, when the electrician said he'd be around "first thing Monday morning" that could mean some time after lunch or even the day after. It's part of the charm of the place in a way but down here we're becoming more mainstream year by year.

Anyway, he's a grand looking dog and he's lucky to have a good home.

I have slowed down considerably. It's lovely.

Congratulations on the new addition to your pack!

We've always thought that five dogs (as we have now) made us dog-lovers and six (has happened twice) made us weirdo crazy animal hoarders. So, you're well on the bright side of the line!

I hate the name 'Boomer'! But we had a dog Precious for 16 years and currently sport a Fonzabellissima, so you can safely ignore my soft prejudice.

I see all that homeowner's split wood--what sort of ax did Allan settle on?

You know I would ignore it no matter what your dogs' names were. :)

Allan will have to tell you about his axe. Wood, the procurement of wood, the drying of wood... it seems to absorb a great deal of his thoughts.

Wow, Allan Wood chops woood, dries wood, procures wood, and thinks about wood. There's definitely some poem or song in there somewhere. Or at least a tongue twister.

There's a hole in the bucket... Or maybe, how much wood can a woodchuck chuck...

I loved that song and have sung it to my grandsons. And do you remember Just for Fun/Wonderama when Sonny Fox made the kids say tongue twisters? He recently died at 96 or so, so your comment made me think of him. (You may have been too young for those shows.)

I do remember Wonderama! But I saw it with Bob McAllister. I knew about Sonny Fox from my parents and/or older sibs. I don't remember much about the show, except the name and the host's name.

You may be surprised to see how long that show ran!

I never saw it with anyoone but Sonny Fox and, like most kids, didn't care what happened after I stopped watching, so had no idea it was on for all those years (til I was 25!). I probably stopped watching when I was 11 or so and became more interested in the Beatles than
"kid stuff." But as kid I watched it every Sunday morning for hours, and on Saturday he hosted another show called Just for Fun that I loved.

Hi Boomer!!! He's so pretty! And his fur looks very soft through the internet.

Also, I think Cookie and Kai grew. Not sure if they're actually an age where they'd grow, but they look bigger in these pictures than I expected.

Also, I'm mindblown that your town a) has a dog wash, and b) DOESN'T have a pub! (The laundromat and dry cleaner also seem like something that should be there, but the pub is most surprising)

His fur is super soft! It's luxurious, soft, and fluffy.

Kai has not grown -- she was full-grown when we adopted her. Cookie has grown since our earliest pics of her, but she is now full-grown, too. It must be perspective.

The dog wash is so weird! It doesn't seem at all like something you would find here. There is a bar/restaurant that probably thinks its a pub, but it's not. It's just a casual restaurant where people also drink. Not at all pubby.

There is also nothing resembling a diner, which really bothers me.

There is a pub in Port McNeil, 40 minutes away -- which bothers me even more!

To be fair, pubs are not as ubiquitous on VI as they are in TO. It is something I really enjoy about Toronto -- proper pubs everywhere.