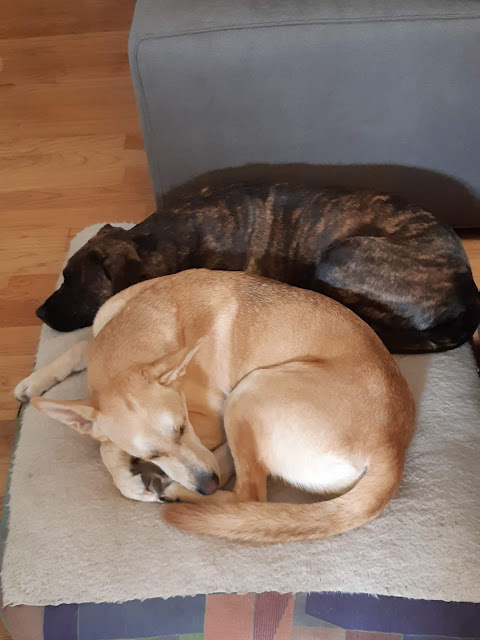 The "fish" are like minnows, maybe two inches long. They dart around, shooting out of the loose sand under the water. Cookie will never catch one ... yet she will forgo the sure thing of a salmon treat to leap about in the water!

Also, she opens the back door to come IN THE HOUSE! We were watching her do this today just standing in the kitchen. It was fascinating. ... I need to teach her to wash dishes or something ...

Also: We learned today that Kai LOVES LOVES LOVES to fetch sticks in the water. LOVES! I threw one flat stick and it skipped on the water a few times and she had to swim out farther than expected to get it and come back. I'm not sure if she ever swam before in her life! (Another time she could not find the stock and was swimming away from shore. I had to call her and throw another stick to get her attention to come back! Yeesh.)

I was on a small island, part of the Cook Islands, the sort you have to get to by boat. There were wild dogs, the gentle kind that you find on these islands with abundant natural food sources. I was told about this small lagoon, a cove really, where they would gather to collectively fish. Sure enough a bunch of them came down and waded out together until they formed a line that stretched from one part of the small cove to another. Then they very slowly moved toward the beach, their line closing, driving the small fish before them. They seemed to get to some point where there were enough fish that they began plunging in, catching not a few fish for their efforts.

I know there's not much unusual in dogs hunting in packs. I'd just never seen dogs fishing in a pack.

As you by now know quite well, it's not the dog chasing fish that's the problem. It's when they find a delightfully ripe carcass on the beach, perfect for rolling in, on a hot, sunny day that's the problem. Before you can say 'oh no you don't' they have.

It sounds as though you two have had a great first summer on the island. I'm very glad to hear it.

Wow! What a treat. I would love to see a pack of dogs fishing!

We are definitely loving the summer here, not least because we can be outside and comfortable, with a light jacket at night, sleeping with the windows open.

We both have very little tolerance for hot, humid weather. Previous to this, summers have meant unbearable heat and humidity, A/C cranked on high, trapped inside -- and for the last few years, unable to get our place truly cool enough for comfort.

But of course it's not just the weather. It's the beauty and simplicity, and our house.

When it comes to liver, I never forget: "I can make your dog my dog--just give me five minutes and a handful of liver...."

I don't know, Laura. I saw it somewhere and it stuck. Too cynical? It goes with the horse wisdom, sure to piss off horse fanciers: 'Horses learn nothing--and forget nothing.' That, I can tell you, is NOT too cynical.

I have had dogs who seem like they'd be perfectly content to motor off with any random UPS driver--forget the handful of liver--and I've had dogs who loathe everyone in the world, save John or Jean, and who know all about that nice-doggie-let's-be-friends trickery.

Two hours! OMG! She must have slept well that night.

She is certainly one smart dog. Silly, perhaps (who chases minnows for two hours without any success!?), but damn smart. And cute as can be!

John, not too cynical AT ALL! Our experience has been the same. Some dogs are perfectly happy with whoever comes their way. Cody always seemed to prefer new people to us. She fell in love with some next-door neighbours and I'm sure she would have been thrilled if they adopted her. Whereas other dogs... such intense loyalty. I used to say if a man ever loved me the way Buster did, I'd have to get a restraining order.

Amy, Allan says the same thing to Cookie: Have you ever had any success doing this? This makes me wonder if the game is the chase, and not actually hunting? We'll never know. :)

Have you ever had any success doing this?

Ignoring the sure thing of canned salmon (RIGHT NOW! IN YOUR MOUTH!) in favour of leaping about in the water after minnows she has never come close to catching does not strike me as the smooth workings of a smart dog's mind!
(Might I suggest coming over, eating the salmon, and then going into the water, and maybe coming out for 5 seconds later on to get more salmon before going back in?)

OK, maybe not THAT smart! But opening and closing doors is pretty damn clever.

I'm so proud of her for opening the door!!

Is she actually trying to catch the fish, or just frolicking among them? In the brief video, it didn't look like she was putting her mouth in the water or anything

I think it's a game. A game she loves and can't wait to play. If it was about catching fish, I don't think she'd be so excited about it, since there is zero reward.