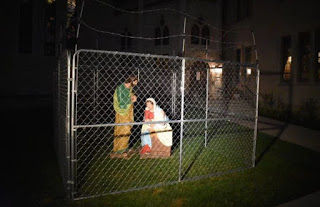 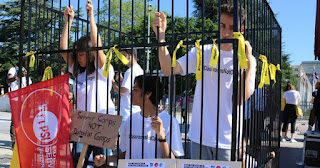 Hacker Magazine has a list of every Concentration Camp in the US by State, City, Address, with phone numbers and fax numbers.

One of the anyifia groups compiled a list of all the Corporations and Universities profiting off the For Profit Concentration Camps. I’ll go look go look for it tomorrow. There’s also a push to get Trudeau to repeal the “First Safe Country” Agreement with the US. I’ll add those.

Ah yes, I got the No Safe Third Country from Amnesty.

Thank you, Jay. Post anything here in comments, please.

They are structured as Real Estate holdings and rely on a regular flow of credit to keep operating and so far, protests have caused BoA to pull their lines of credit.

They make $770 a day per head, which is why there are thousands of empty beds at the DFCHS Facilities, that the children are supposed to be transferred to if unaccompanied, with in 72 hours, but children have been held for months.

One of the reasons the CBD/ICE take the kids away from their families at the Border, and refuse to release them to parents and family members already in the US, is to feed this profit chain.

Gen. Kelly went right from Dolt45’s maladministration to Colburne International, one of the Concentration Camp Corporations. It runs the notorious Homestead Concentration Camp where there is no soap, no toothbrushes, no diapers, refugees have to drink from toilets,.......

Lists of Corporations, Universities and Service Providers to the Concentration Camps in the US.

We also had a No More Cages demonstration on July 4 here in Austin, with circa two thousand showing up. And I just found out that a coworker has immigrant family members who have been jailed and had their children taken from them within the past few months. Like you, I have almost no hope at all, but I don't know what else to do but try by showing up at demonstrations or whatever is going on. But I always just want to cry about it all.

The United States' newest concentration camps are rife with disease, filth, and lack of proper food. Doctors say children are being imprisoned in "torture facilities". Seven children have died recently (and 24 additional people have died in ICE custody under Trump). And although the prisoners do not have soap or toothbrushes and are unable to sleep because the cells are overcrowded, the Trump administration has told judges the conditions are both safe and sanitary.