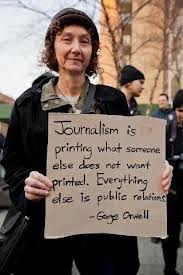 Apart from the obviousness and triteness of the whole quotation, the phrase 'public relations' is what gives me particular doubts. It's just the sort of weasel term Orwell would not have used. Surely he would have preferred 'propaganda.'

And would he have been so sloppy as to use 'else' in abutting sentences, especially when the first 'else' is unnecessary and confusing?

Not my George Orwell!

And, finally, how widespread would such an American idea and term have been in 30s and 40s Britain?

I sometimes listen to an interesting PBS program calling "A Way With Words" which is essentially about etymology. One of the hosts ran across a quote that didn't sound right to him (I can't remember what the quote was now) and so he set about to search everywhere including the Library of Congress. He finally realized that some mischief maker had intentionally put it on a wiki page and all other references to the quote could be traced back to that.

But as you say, misattribution is not a child of the digital age. In the early sixties my father, facing a desperate deadline for something, made-up a quote and attributed it to an important American political figure. The quote ended up in national print and more than once he saw the quote attributed to the person that he had claimed made it. He always felt kind of bad.

Ha ha, thanks. Real librarian stuff, too - I didn't do the research, but I found sources who had.

Very good point re American-sounding quote, and the word "public relations," which was in use in Orwell's time, but which somehow I don't hear Orwell using.

Katharine Graham and/or W R Hearst makes more sense, although SHEESH, Hearst talking about public relations?! *coughSpanishAmericanWarcough*
He taught the world how it was done!

In the early sixties my father, facing a desperate deadline for something, made-up a quote and attributed it to an important American political figure. The quote ended up in national print and more than once he saw the quote attributed to the person that he had claimed made it.

Oh geez, to see your own brainchild move into the world that way!

Almost no one re-checks attribution -or facts, for that matter.

That show sounds great. I love etymology. I often use Etymonline and World Wide Words.

It's been said that eventually, once the Internet's been around long enough, every statement will end up attributed to either Mark Twain or Kurt Vonnegut.

One of my favourites (seen on FB) is

"Always check your internet quotes." - Abraham Lincoln, in an email to Mark Twain

or some similar combo.