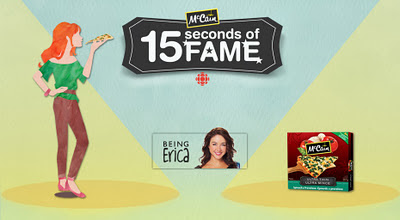 When I first glanced at your headline in my feed reader, I thought I read "Cain pizza," as in Godfather pizza.

Hey, some female audiences like eye candy too, you know. :)

It took me a few minutes to even figure out what you meant, re Cain and Godfather Pizza. That's how much attention I pay to that circus.

On a recent Wait, Wait... Don't Tell Me!, Charlie Pearce described eating a Godfather's pizza. He said he'd eaten half the box before he realized he'd finished off the pizza.

He said he'd eaten half the box before he realized he'd finished off the pizza.

By the way, by not following the circus, you're missing out on some excellent clowns. Michele Bachmann was putting on quite a show for a while, until she collapsed faster than the 2011 Red Sox. And Rick Perry's just proposed the most blatantly "give money to the richest of the rich" tax reform plan ever -- or, at least, since Herman Cain's 9-9-9 plan last week (which Bachmann half-seriously condemned as Satanic because it's 666 upside down).

It's gotten so over-the-top that Pat Robertson is telling them that they need to stop being so extreme if they want to win the election.

But the best bit, recently, has been watching Herman Cain trying to salvage his political career after saying, publicly, that he doesn't think that it's the government's role to make decisions about abortion. Wow, did that set off fireworks! I haven't seen anyone backpedal so hard since Wile E. Coyote trying not to go over a cliff.

(The subsequent interview questions were an interesting insight into the misrepresentation of what "pro-choice" means on the right. When the interviewer responded to Cain's "it's not the government's role" bit by saying, "Oh, so you're pro-choice, then?", Cain insisted that he's not -- he's pro-life, he believes life begins at conception, he just doesn't think it's the governments job to make that decision for other people. He refuses to accept that "pro-choice" means "it your choice, not the governments".

Of course, he's now calling for a federal ban on abortion in order to salvage his reputation with the Tea Party...)

Hey, stop referring to these a*holes and the Red Sox in the same sentence! ;)

It's gotten so over-the-top that Pat Robertson is telling them that they need to stop being so extreme if they want to win the election.

Now I have a mental image of Michele Bachmann as the Wicked Witch of the West, melting away...

But it was Christine O'Donnell who had said she'd "dabbled in witchcraft" (and later had to run an ad insisting she was not a witch).

Now I have a mental image of Michele Bachmann as the Wicked Witch of the West, melting away...

Just what I was going for.

It's great you love the show. If I loved it, I'd suck it up too. That's exactly what I do with baseball, which is now packed with in-game ads end to end. I detest it, but I love and need baseball, so I put up with it.

Producers and sponsors would like us to believe that these shows couldn't exist without these in-show ad placements. Couldn't make us much money, more like. Why couldn't Being Erica survive on regular ads if the CBC wanted it to?

DVRs and digital downloads have drastically reduced what advertisers are willing to pay for non-incorporated ads. Not to mention many people are like me and only buy the season on DVD at the end of the season and not watch on TV. This isn't even a small studio problem as many of the USian studios do this too. The recent special features I was watching on How I Met Your Mother was talking about this new way of funding TV programs.

DVRs and digital downloads have drastically reduced what advertisers are willing to pay for non-incorporated ads. Not to mention many people are like me and only buy the season on DVD at the end of the season and not watch on TV.

Right. That's what I meant when I wrote Since viewers don't watch commercials anymore, advertisers embed ads right into the show. in this post.

You're also right that it has nothing to do with small studios. It's been going on for many years with studios large and small. As I said in comments above, one of the worst offenders is Major League Baseball, and they are a multi-billion dollar behemoth.

However, when people turn a creative entertainment product into a product pitch, it makes me sick, and I complain about it!

Also, the fact that everything comes out on DVD, which are either bought or rented, belies the supposed "need" to do in-show product placement.

I think much of this new "need" for product placement is the sponsors' desire to put their ads in front of our faces, not actual financial need to produce a show.

Also, the fact that everything comes out on DVD, which are either bought or rented, belies the supposed "need" to do in-show product placement.

Not really. DVD sales are almost never profitable enough that they would have paid for the production of the show -- at least, not at the production quality, or with the actor salaries, that the shows currently support.

It's pretty near impossible (in North America) to get a studio to fund a series solely on the promise of revenue from DVD sales -- though this may start changing soon as smaller direct-to-net projects are successful.

In Japan, on the other hand, there is a long tradition of straight-to-video series (mostly animated).

Sorry, missed the point of what you were saying. My bad.

James, I guess it's wishful thinking on my part. Still, if producers can't find a way to create a show without turning it into an advertisement, maybe they should be finding ways to create less expensive shows. Maybe network TV can't support the salaries it has in the past.

More likely they'll continue down the advertising route as far as they possibly can, potentially alienating whatever small audience they still have less... before they fade away altogether.

James, I guess it's wishful thinking on my part. Still, if producers can't find a way to create a show without turning it into an advertisement, maybe they should be finding ways to create less expensive shows. Maybe network TV can't support the salaries it has in the past.

No argument there. The problem is that advertising is the easiest way to raise lots of money, so networks will probably use it until they wither and die.

There's an old joke that 50% of the money spent on advertising is wasted -- the problem is, no-one knows which 50% that is. So advertisers will pour obscene amounts of money into ads they think might work (just look at the rates charged for Superbowl slots).

My all-time favourite piece of product placement was in the obscure movie The Wizard of Speed and Time by stop-motion animator Mike Jittlov. The feature film grew out of a wonderful short of the same name, which he made for Disney. The feature version is about a stop-motion animator fighting the evil studio as he tries to make his short film. The real-life studio which was funding the feature insisted that he use product placement for a soft drink (I think it was Coca-Cola). Jittlov hated the idea, but didn't have a choice if he wanted his film funded, so he went along -- but he made sure that the only characters drinking the soft drink were the evil studio execs.

The studios got the last laugh, of course; they own the film, and have stiffled its release. It didn't hit studios until six years after it was made, and only had one VHS and one laserdisc release. Fans have been circulating bootlegs ever since, though an official DVD release would probably do reasonably well.