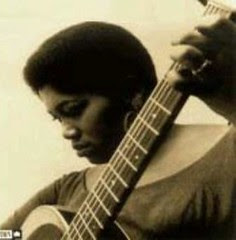 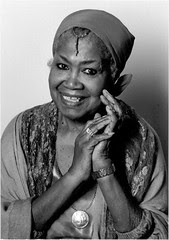 The great musician and activist Odetta has died at the too-young age of 77.

I am very saddened at this loss, but so grateful for all she gave the world. I'm also personally grateful that I heard her sing several times, in the days when I attended folk festivals. Rosa Parks, who died only a few years ago, was once asked which freedom songs meant the most to her. Her reply: "All of the songs Odetta sings."

From the New York Times obit.

She found her own voice by listening to blues, jazz and folk music from the African-American and Anglo-American traditions. She earned a music degree from Los Angeles City College. Her training in classical music and musical theater was "a nice exercise, but it had nothing to do with my life," she said.

"The folk songs were — the anger," she emphasized.

In a 2005 National Public Radio interview, she said: "School taught me how to count and taught me how to put a sentence together. But as far as the human spirit goes, I learned through folk music."

In 1950, Odetta began singing professionally in a West Coast production of the musical "Finian's Rainbow," but she found a stronger calling in the bohemian coffeehouses of San Francisco. "We would finish our play, we'd go to the joint, and people would sit around playing guitars and singing songs and it felt like home," she said.

She began singing in nightclubs, cutting a striking figure with her guitar and her close-cropped hair.

Her voice plunged deep and soared high, and her songs blended the personal and the political, the theatrical and the spiritual. Her first solo album, "Odetta Sings Ballads and Blues," resonated with an audience hearing old songs made new.

Bob Dylan, referring to that recording, said in a 1978 interview, "The first thing that turned me on to folk singing was Odetta." He said he heard something "vital and personal," and added, "I learned all the songs on that record." It was her first, and the songs were "Mule Skinner," "Jack of Diamonds," "Water Boy,' "'Buked and Scorned."

Her blues and spirituals led directly to her work for the civil rights movement. They were two rivers running together, she said in her interview with The Times. The words and music captured "the fury and frustration that I had growing up."

How sad. I've been a fan of hers since the early 60's. I also saw her perform in a small, informal setting in Montreal in 1967. She was awesome! A big woman, with a big voice & a big heart.

She was awesome. I'm glad you saw her sing, too.

I was saddened to learn about her death. I am a big folk music fan, especially the folk music from the 60s and 70s. She was a big part of that.