the end of america, visual version 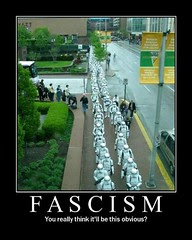 Even the 'Star Wars' prequels had it in there! Childish, CGI-ridden, but the central plot: it's all there!

Amazing pic. Thanks for sharing.

Thank you, Neutron. Nice to see you here.

AMNeverPerish, yes, by degrees, by now by a great leap as well.

I love the political messages in Star Wars! I'm a real fan of the first 3 movies.

This is a long preface to 'Animal Farm' with a critical introduction by Robert Weaver. It is worth reading in full, as it is a dense and multi-faceted argument. I tried to quote lots of it but I fear that individual segments could be taken out of context.

The part we should absolutely not ignore, though, is this, from the middle of the Preface itself.

Orwell's main concern is the tendency of the English intelligentsia (including the media) to resist or suppress any and all attacks on Soviet Russia, simply because they are a wartime ally.

But these words can be applied far more widely.

"Over and above the familiar Marxist claim that 'bourgeois liberty' is an illusion, there is now a widespread tendency to argue that one can only defend democracy by totalitarian methods. If one loves democracy, the argument runs, one must crush its enemies by no matter what means. And who are its enemies? It always appears that they are not only those who attack it openly and consciously, but those who 'objectively' endanger it by spreading mistaken doctrines. In other words, defending democracy involves destroying all independence of thought.

The most ardent Russophile hardly believed that all of the victims were guilty of all the things they were accused of. but by holding heretical opinions they 'objectively' harmed the régime, and therefore it was quite right not only to massacre them but to discredit them by false accusations. The same argument was used to justify the quite conscious lying that went on in the leftwing press about the Trotskyists and other Republican minorities in the Spanish civil war. And it was used again as a reason for yelping against habeas corpus when Mosley [leader of the British Fascist party] was released in 1943.

These people don't see that if you encourage totalitarian methods, the time may come when they will be used against you instead of for you. Make a habit of imprisoning Fascists without trial, and perhaps the process won't stop at Fascists...

...Tolerance and decency are deeply rooted in England, but they are not indestructible, and they have to be kept alive partly by conscious effort. The result of preaching totalitarian doctrines is to weaken the instinct by means of which free peoples know what is or is not dangerous...

...But how much of the present slide towards Fascist ways of thought is traceable to the 'anti-Fascism' of the past ten years and the unscrupulousness it has entailed?"

I think - as ever with a man who cared about language and humanity - this speaks for itself.